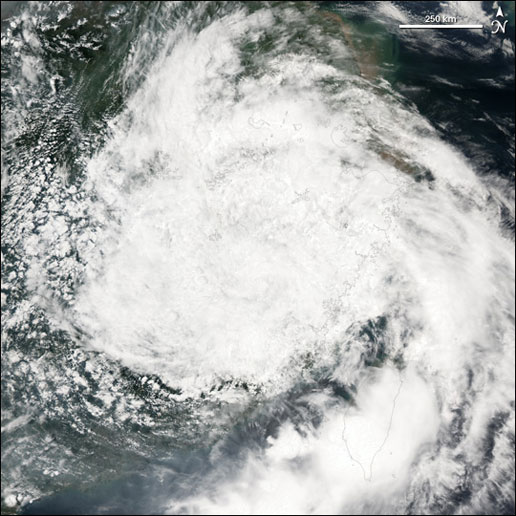 Image above: Super Typhoon Haitang is shown here on the morning of July 20, 2005. This image was captured by the Moderate Resolution Imaging Spectroradiometer (MODIS) on the Aqua satellite at 05:15 UTC (3:15 p.m. local time), well after it come ashore onto mainland China and lost much of its power and been downgraded to a tropical storm. Four deaths in Taiwan are attributed to the storm as it passed over the island, and as many as 1 million people have been evacuated in mainland China. All flights out of the cities of Fuzhou and Quanzhou were cancelled in view of the danger of the storm. + High resolution image Credit: NASA 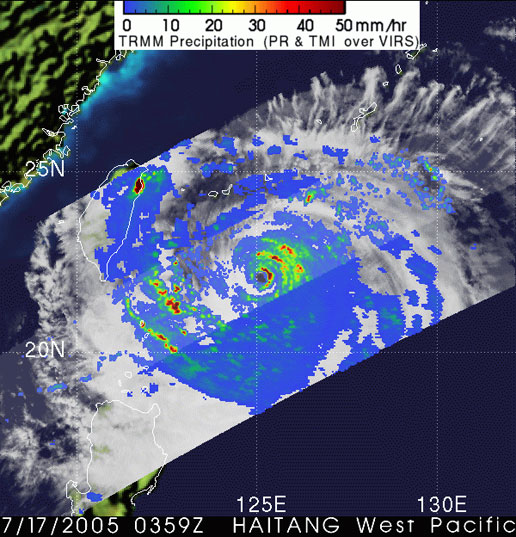 Image above: This image was taken by the Tropical Rainfall Measuring Mission or TRMM satellite and shows Typhoon Haitang as it is approaching Taiwan where it eventually made landfall. The image was taken at 03:59 UTC 17 July 2005 and shows the horizontal distribution of rain intensity looking down on the storm. Rain rates in the center of the swath are from the TRMM Precipitation Radar (PR), while those in the outer portion are from the TRMM Microwave Imager (TMI). The rain rates are overlaid on infrared (IR) data from the TRMM Visible Infrared Scanner (VIRS). At the time of this image, Haitang was a Category 5 super typhoon with maximum sustained winds estimated at 140 knots (161 mph) by the Joint Typhoon Warning Center. Click here to learn more about this image. Credit: NASA 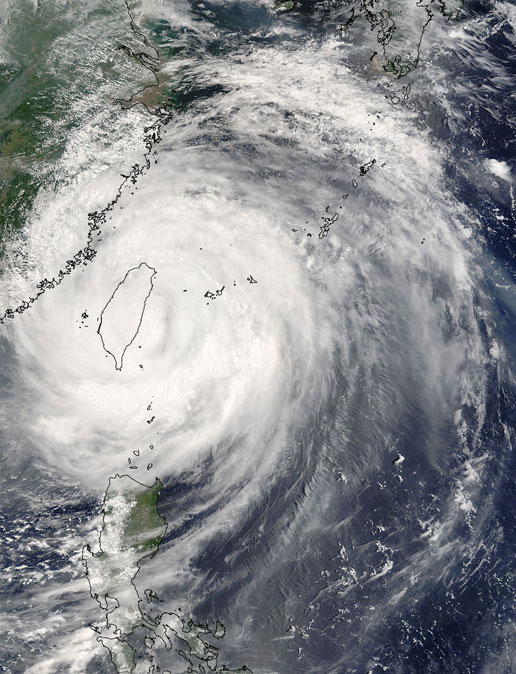 Image above: This image came from the MODIS instrument on the Terra satellite and was taken on July 18, 2005. The eye of the hurricane is almost directly over Taiwan in this image. The image was captured at 2:20 UTC time or 10:20 p.m. EST on July 17, 2005. + High resolution image. Credit: NASA 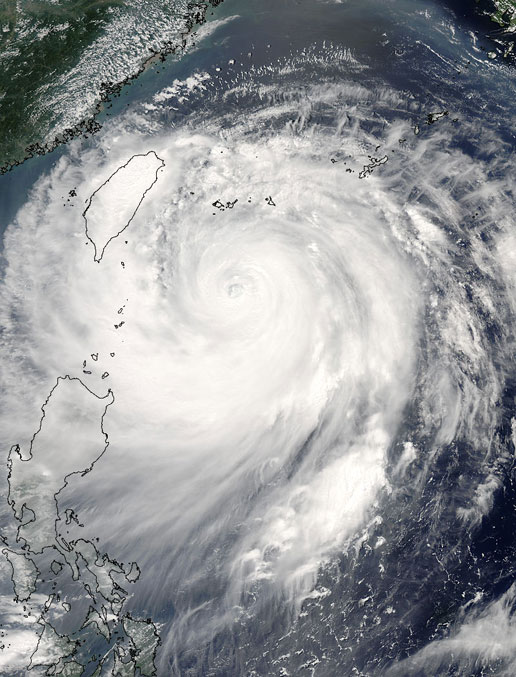 Image above:Super typhoon Haitang struck China as a Category 3 typhoon at about 00:00 GMT on July 18, 2005. Data supplied by the US Navy and Air Force Joint Typhoon Warning Center suggest that the point of landfall was near 23.7 N, 121.6 E. Haitang brought 1-minute maximum sustained winds to the region of around 194 km/hr (120 mph). Wind gusts in the area may have been considerably higher. This image came from the MODIS instrument on the Aqua satellite and was taken on July 17, 2005. + Higher resolution image. Credit: NASA 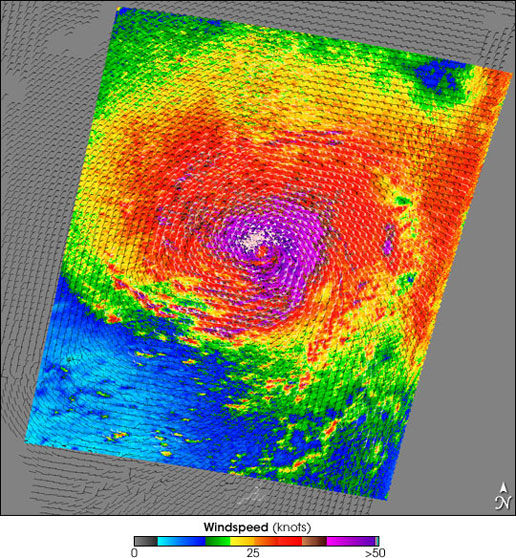 Image above: Typhoon Haitang is shown here as observed by NASA’s QuikSCAT satellite on July 15, 2005, at 08:29 UTC (17:29 in Tokyo). At this time, the typhoon had 185 kilometer per hour (100 knots) sustained winds, giving it a Category 3 rating on the Saffir-Simpson tropical storm scale. Taiwan is located to the west of the storm, not far off the typhoon’s path at the time. The image depicts wind speed in color and wind direction with small barbs. White barbs point to areas of heavy rain. The highest wind speeds, shown in purple, surround the center of the storm. + High resolution image. Credit: NASA/JPL 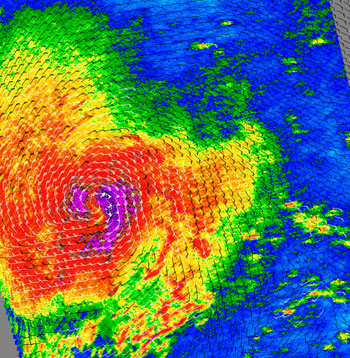 Image above: Typhoon Haitang is shown here churning steadily towards Taiwan and China. This image shows the storm’s swirling wind patterns as observed by NASA’s QuikSCAT satellite on July 14, 2005, at 19:19 UTC (14:19 Eastern Daylight Time). At this time, the typhoon was located hundreds of kilometers from the nearest major land masses.

The image depicts wind speed in color and wind direction with small barbs. White barbs point to areas of heavy rain. The highest wind speeds, shown in purple, surround the center of the storm.

Measurements of the wind strength of Typhoon Haitang show sustained winds of around 85 knots and gusts up to 105 knots at the time of the QuickScat observations. The images, however, reveal lower wind speeds. This is because the power of the storm makes accurate measurements difficult. + Click here for high resolution image. Credit: NASA/JPL
› Back To Top