Grow Text SizeShrink Text Size
Hubble's New Covers Provide Blanket of Protection
The Hubble Space Telescope's cameras, sensors and spectrographs are humankind's eyes into the universe. They send us stunning images and answer century's old questions about the history and composition of the cosmos. But these high-tech instruments couldn't function without protection from the harsh conditions of space. 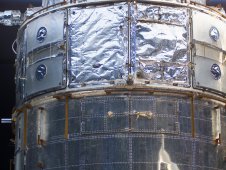 Hubble during Servicing Mission 3B in 2002. From left to right, Bays 6, 7, 8 and 9. Bays 6 and 9 are covered with New Outer Blanket Layers. New Outer Blanket Layer covers were installed on Bays 5 (not pictured), 7 and 8 during Servicing Mission 4. Credit: NASA Hubble is covered with blankets of layered insulation, along with radiators, that control its temperature as it orbits Earth, passing through very hot sunlight and very cold night. The outermost layer of the blankets is made of metalized Teflon because it releases heat and reflects solar energy. Since NASA launched the telescope in 1990, radiation has caused the insulation blankets to become brittle and crack, especially on the side facing the sun where some of the cracks are several feet long.

Compared to the other tasks that faced the spacewalking astronauts during this daunting mission, the insulation repair may sound simple. But years of research and planning led up to these repairs.

During the first Hubble servicing mission in 1993, astronauts removed two multilayer insulation blankets and brought them back for analysis, along with one of the solar arrays. Researchers from NASA's Goddard Space Flight Center and NASA's Glenn Research Center studied the two insulation blankets and discovered that that they were brittle with small cracks on the side facing the sun.

Four years later, when the space shuttle Discovery returned to Hubble for Servicing Mission 2, astronauts found large cracks in the insulation on the sun-facing side of the telescope. They patched the biggest cracks and brought a piece of the outer layer of blanket home with them for analysis. 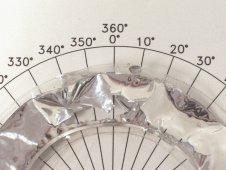 A single weld of thermal shield retrieved during Servicing Mission 3B after more than eight years of space exposure. Credit: NASA
› View Detailed Images Goddard then formed a Multilayer Insulation Failure Review Board and invited three Glenn researchers to join them. The board analyzed the retrieved material and conducted tests in simulated space environments to determine the cause of degradation on Hubble. The board also evaluated replacement materials and recommended a new insulation. Several members of the board continued their work for more than a decade using samples retrieved from the following two servicing missions.

In 2007, Goddard invited five Glenn researchers to be part of a Multilayer Insulation Assessment Team in preparation for servicing mission 4. The team used analyses of insulation retrieved during the prior missions to predict the condition of the insulation after additional time in space.

According to Hubble Materials Lead Benjamin Reed of Goddard, the "predictions were the basis for multilayer insulation related flight rules that governed during Servicing Mission 4."

As they replaced the thermal blankets, the Atlantis crew had to be extremely careful not to allow small particles to flake off and invade the telescope's sensitive scientific instruments. With this in mind, mission managers planned for the astronauts to perform tasks that involved handling insulation after they'd completed tasks involving sensitive equipment. Members of the Multilayer Insulation Assessment Team from Glenn watched the procedures on NASA TV, helping to look for any loose pieces and were on-call to answer questions.

The team is thrilled that the astronauts were able to remove the damaged blankets before installing the New Outer Blanket Layer covers on Bays 5 and 8.

"It's unusual to get materials back after long-term space exposure, so we're very happy that the blankets were retrieved. This will allow analyses of Teflon insulation that has experienced 19 years of space exposure" said de Groh.

"We feel very fortunate that we've been involved in studying materials from every Hubble servicing mission," she continued. "Our knowledge helped us to contribute to this very important servicing mission and to other spacecraft missions too."

Researchers from the Goddard and Glenn teams have written extensively about how radiation, temperature cycling and atomic oxygen have affected Hubble insulation materials. Spacecraft designers often request the information. For instance, Ball Aerospace & Technologies Corp. recently used the data when selecting materials for the Worldview 2 satellite and the Operational Land Imager for an upcoming Landsat mission.

After the Atlantis crew returns with the degraded thermal insulation blankets, team members from Goddard and Glenn plan to analyze the blankets and add the data to the wealth of knowledge they've already accumulated for future missions.