Grow Text SizeShrink Text Size
Goddard Engineers and Divers Multi-Task for Hubble
Ever wonder how NASA astronauts prepare for Hubble Space Telescope servicing missions? I wish I could say it's rocket science, but what it really comes down to is lots of preparation. And the astronauts spend many hours practicing on intricate, full-sized models of the telescope.

In planning for Servicing Mission 4 to Hubble, crew members divide their time between NASA’s Johnson Space Center, Houston, working underwater on a Hubble mock-up to simulate the effects of weightlessness, and NASA’s Goddard Space Flight Center, Greenbelt, Md., where they practice scheduled mission tasks on a Hubble mock-up inside a large clean room facility.

"When servicing Hubble, spacewalking time is our most precious resource,” said Mike Weiss, Hubble’s Technical Deputy Program Manager at Goddard. “Every second counts, so every activity performed by the crew must be meticulously engineered, choreographed and practiced ahead of time.”

The best way for the astronauts to be able to do the most during their limited spacewalks is to practice on intricate models of Hubble. One such model is in a huge water tank at Johnson. This water environment closely replicates the weightlessness of space, allowing the crew to perfect their techniques so by the time they actually reach Hubble there are few or no surprises.

The astronauts’ Earthly practice sessions help them prepare for any issues they could face once they open Hubble’s bay doors and begin working.

“During the mission the astronauts perform on-orbit tasks inside Hubble, wearing bulky, pressurized gloves and under lighting conditions that are not always optimal,” said Justin Cassidy, Crew Aids and Tools Lead Systems Engineer at Goddard.

The mock-ups of the telescope are so precise that the crew becomes acutely aware of how they need to move and how much clearance they will have once they get inside of Hubble. And since each spacewalking task is unique, the team develops new tools and crew aids that ensure the job gets done as easily and efficiently as possible. 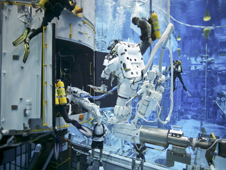 Servicing Mission 4 astronauts practice on a Hubble model underwater at the Neutral Buoyancy Lab in Houston under the watchful eyes of NASA engineers and safety divers. Click image for enlargement. Credit: NASA “It’s not enough to assume that since a past spacewalk went well, the next will too. Every time we do a mission, there’s always a new task that hasn’t been done before so we often have to make new astronaut tools,” said Cassidy. “Consequently, there is a constant need for a facility where space walking procedures can be developed and ideas and equipment can be tested.”

Such a place is the Neutral Buoyancy Laboratory (NBL) at Johnson. The NBL houses an enormous water tank. This 202-foot-long by 102-foot-wide by 40-foot-deep structure contains a whopping 6.2 million gallons of purified water that is completely filtered and recycled every 19.5 hours, providing the astronauts and NASA divers with exceptional water clarity.

Working underwater closely simulates the weightless environment encountered by spacewalking astronauts. The underwater environment helps them learn how to position their bodies and how to maneuver themselves during an EVA, or spacewalk. Since they are actually in pressurized spacesuits, they also have an opportunity to evaluate reach, access and visibility to specific work areas.

While being underwater comes pretty close to replicating the effects of zero-gravity, water drag can be a hindrance, making some things easier to do in the water than in space and other tasks more difficult. In order to compensate for this “negative” training, astronauts receive additional training on a special air-bearing floor at Johnson in order to learn the effects of dealing with large masses in space.

The Hubble team refers to underwater engineering development and flight training as “dive runs.” The team will complete about 12 dive runs before the targeted 2009 mission to Hubble.

According to Weiss, every hour of work performed during an actual spacewalk equals about 20 hours of underwater engineering development. Once NASA assigns an astronaut crew and the engineering products are turned over to the astronauts’ training team for actual flight training, the crew then spends about 14 hours training under water for every hour they actually spend performing spacewalking tasks.

Goddard provides Hubble engineers who dive with the astronauts to define procedures and tool requirements as well as training the crew in the use of the tools and crew aids. Johnson supports the dive runs with safety divers, who ensure the crew’s wellbeing, and video photographers and still photographers that document the crew’s activities. The team then studies the images captured in the tank to evaluate each run and modify tool designs, which increases efficiency. 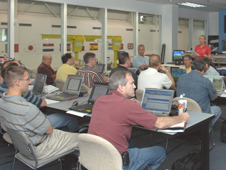 Hubble astronauts join NASA engineers for a debrief session on the day’s underwater practice. The sessions provide feedback to the Hubble astronauts, engineers, and dive team as they fine-tune crew aids, tools, and procedures for the Hubble servicing spacewalks. Click image for enlargement. Credit: NASA But how did the Goddard engineers get involved in diving? “Way back, when we were going through engineering development for the first servicing mission, we decided that instead of hiring divers we’d have to train on Hubble terminology, mechanical operations and complexities of the interfaces, and then have them debrief us on what they learned underwater, it would be more efficient to just put our engineers in the water,” said Weiss. “This efficiency allowed the Johnson divers to focus on their primary duties.”

“The divers that Johnson supplies us at the NBL are wonderful,” elaborated Cassidy. “But since operations and hardware change so much it would be impossible for them to keep up with all the new developments. It’s extremely important that we bring our own people who are intimately familiar with the ins and outs of a particular dive run.”

As the Center primarily responsible for Hubble servicing development, Goddard manages all pre-dive development and keeps its designs up-to-date during the testing period leading up to launch. It is not unusual for the team to make tweaks to tools and crew aids after each run. By having the Goddard engineers experience the dive runs along with the astronauts, the entire team gains instant insight into what improvements are needed.

“Rather than just developing drawings and building and testing hardware for the Hubble mission, our engineers get up close and personal with the crew,” remarked Mark Hubbard, Deputy Carrier Manager for Hubble at Goddard and team diver. “When I dive, it’s almost like I’m in space with the astronauts, so I get a sense of what they need to do in order to accomplish a particular task.”

Hubbard equated the dive experience to learning a subject in school. “When you are in school, you learn a lot from books, but the actual hands-on experiences help things really sink in.” 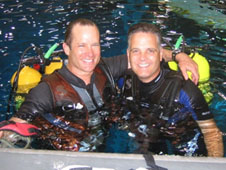 A typical dive at the NBL involves two astronauts and about 20 to 25 people, all focused on a particular spacewalking task. With such a high volume of bodies in the tank, it becomes a veritable beehive of divers swarming around the astronauts.

Despite the number of people in the tank, the Goddard divers still have the ability to interact with the astronauts when their guidance is needed. And since communications between astronauts and divers is somewhat limited (the astronauts are fitted with microphones, whereas the divers are not), immediately following each dive, all participants go topside for a debriefing. This after-dive meeting enables necessary dialogue between the Goddard engineers and astronauts to discuss in detail what they observed and how they can make future dive runs more efficient.

Currently, about 25 Hubble personnel are certified to dive in the NBL. A group of four Hubble divers rotates in two-hour shifts during a simulated six-hour EVA dive run. This once in a lifetime experience comes with high expectations, though. The Hubble divers are tasked with ensuring that each spacewalk will be executed as safely and efficiently as possible.

Asked what Hubbard finds most rewarding about his unique opportunities with the Hubble mission he said, “I was in the water one day preparing for a dive just looking around and realizing here I am in the space program … and it just struck me, this is incredible! Not too many people get to do stuff like this. Here I am working side-by-side with these extraordinary men and women who most people only get to read about in newspapers and magazines.”

> Read the other stories in the "Next Stop: Hubble" series Susan Hendrix
Goddard Space Flight Center

Kelsey Paquin and Dana Martinez contributed to this report.
› Back To Top