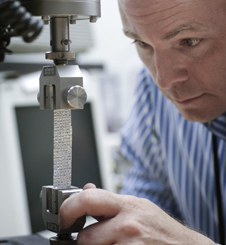 Goddard engineer Ben Reed studies a portion of a multi-layer blanket from Hubble, brought back to Earth after Servicing Mission 3A in 1999. Click image for enlargement. Credit: NASA The Hubble Space Telescope Servicing Mission 4, targeted for 2009, aims to complete multiple upgrades and repairs, many of which are crucial for prolonging the telescope’s operational life. One of the mission’s many objectives is the refurbishment of its outer thermal blankets.

The Importance of Thermal Blankets

“Thermal blankets are to spacecraft as clothes are to people,” says Mike Weiss, Hubble’s technical deputy program manager. “Just as clothes cover our skin and help protect us from nature's elements…the cold winter wind and the scorching summer sun, thermal blankets protect Hubble from the harsh environment of space.”

Hubble orbits Earth at five miles per second, meaning that it fully circles the planet in 97 minutes and completes about 15 orbits each day. As it travels through Earth’s shadow, over the side lit by the sun and around again, the telescope is exposed to both the extreme cold of deep space and the powerful heat of the sun in rapid and constant cycles.

“The thermal blankets’ outer layer swings about 215 degrees Fahrenheit every 45 minutes,” says Ben Reed, a group leader assigned to the Materials Engineering Branch at Goddard. So the blankets must be able to insulate Hubble’s equipment from such extreme temperature changes.

To provide adequate insulation for Hubble, the blanketing material used on the telescope is essentially 16 layers of dimpled aluminum with an outer Teflon skin. It effectively protects the onboard instruments against extreme temperature swings even though the blanket is incredibly thin, measuring less than one-tenth of an inch thick when laid flat. 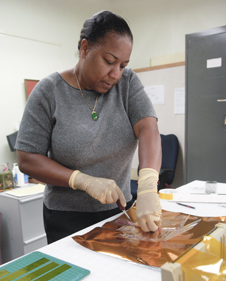 Technician Brenda Estavia cuts a piece of aluminum kapton film that will become part of a thermal blanket. Click image for enlargement. Credit: NASA “The space environment is extremely harsh,” Reed says. “It begins to degrade the telescope’s external surfaces from day-one in orbit. Not surprisingly, since Hubble has been up there since 1990, the outer Teflon layer has started to crack.” Thus, it is crucial to repair or replace the blankets from time to time.

According to Shirley Adams, group leader for blanket fabrication, her employees come from very diverse backgrounds. “Some have designing backgrounds in upholstery work, costume designing, and one even has a background in ice skating costume-making,” said Adams.

Such talents have proven very beneficial since sewing, stitching and custom-fitting the different thermal blankets for the telescope is accomplished in-house at Goddard. Coupled with experts in materials and mechanical engineering, the expertise at Goddard makes the Center the logical home for the development and production of the blankets, as well as analysis of blankets the astronauts have brought back on previous servicing missions.

The three remaining original sections of blankets on Hubble are now exhibiting cracking and degradation and may be replaced during the next servicing mission in 2008. 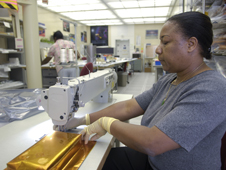 Knowledge gained from the thermal blankets returned from Servicing Mission 3A is helping the Goddard engineers to develop more reliable versions, not just for Hubble, but for a host of future space-based missions.

“Certainly the people working on the sunshield for James Webb Space Telescope have read our papers, and they have taken those lessons learned to heart in choosing the appropriate material for their sunshield,” Reed says.

Sharing information and data is just one of several ways the engineers at Goddard are working to ensure future spacecraft are durable enough to survive their mission lifetimes.

“Protecting Hubble from the harsh environmental effects of space with thermal blankets is like protecting a mountain climber ascending to the summit,” Weiss says. “Over time, the wind and elements might crack and tear the outer layer of the hiker's insulated clothing. The clothing might look tattered, but the hiker is still receiving the thermal protection needed to allow him or her to continue their exploration efforts. The same can be said of the thermal blankets currently on Hubble and the ones to be installed on Servicing Mission 4 that will allow Hubble to continue its incredible exploration of the universe.”

> Read the other stories in the "Next Stop: Hubble" series Dana Martinez and Kelsey Paquin
Goddard Space Flight Center