View a short video about the Crew Aids and Tools team at NASA’s Goddard Space Flight Center. The team is responsible for designing and manufacturing special equipment for astronaut use on Hubble servicing missions.

Think of the average handyman, who relies on a standard set of tools -- screw drivers, socket wrenches, power drills -- to get the job done.

But when you’re working in space, the average tools just won’t cut it. Our specially trained handymen are astronauts, and they need specialty tools to accomplish out-of-this-world tasks. Imagine them trying to work while wearing big, bulky, pressurized gloves, tightening bolts that are different from any we are used to here on Earth, while floating weightless in an environment where the temperature can drop 100 degrees F in a matter of minutes.

This scenario should help you to grasp the difficulties that astronauts face when performing spacewalks, and why custom tools are essential.

The final shuttle servicing mission to the Hubble Space Telescope is fast approaching. Engineers at NASA’s Goddard Space Flight Center in Greenbelt, Md., have been working diligently on custom tools and other aids that astronauts will need as they undertake necessary upgrades and repairs to the famed observatory.

The Difficulties of Working in Space

“It isn’t possible for astronauts to use normal tools from the hardware store, because working in space means doing so in a unique environment,” said Jill McGuire, crew aids and tools manager for the Hubble Space Telescope Program at Goddard.

“The astronauts have limited mobility in their space suits, so one of the things they have to cope with is hand fatigue due to constantly fighting against the pressure of the suit,” McGuire said. “Therefore, we need to build larger tools that have specially designed handles and triggers that make it easier for them to work in their suits.”

Another hard part of working in the space environment is the large temperature extremes, which create a need for special materials and lubricants that you can’t find in a hardware store.

Most tools the average consumer uses contain a “wet” lubricant or oil, which cannot withstand harsh temperature extremes, so the Goddard engineers use a different technique called “dry film” lubricant, which allows parts to slide with respect to one another.

This isn’t to say that commonly used tools are worthless for servicing missions, as special adaptations can sometimes be done to make them fit for use. In fact, much of the hardware in the astronauts’ inventory of custom tools are actually modified versions of common tools, such as sockets and socket extender bars. The rest are designed and built to help the space-walking astronauts service the one-of-a-kind interfaces and features on the telescope. 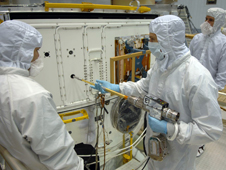 Servicing Mission 4 astronaut Drew Feustel trains with fellow astronauts and Hubble engineers in the clean room at NASA’s Goddard Space Flight Center. Feustel is using a computer-controlled power tool, called the Pistol Grip Tool, to install the Wide Field Camera 3 into a high-fidelity Hubble model. Credit: NASA
> Larger image It isn’t just the tools that receive precise attention to detail, though. “Crew aids” are anything that will help the astronauts to get their job done, right down to the bags that are used for collecting and discarding old fasteners. In order to ensure that these tools and crew aids perform as designed, every aspect and detail of the astronauts’ spacewalks must be meticulously planned, developed, and tested before venturing into space.

The Need for New Tools

"Hubble was originally designed to be serviceable, so there was a set of tools that were developed to meet core servicing needs, but as each mission developed, we did a lot more servicing than we ever imagined would be done to the telescope," said Mark Jarosz, extra-vehicular activity and crew systems manager at Goddard. "So in order to do those new things -- like repairs on the Space Telescope Imaging Spectrograph (STIS) and the Advanced Camera for Surveys (ACS) science instruments -- unique tools are needed."

Although Hubble's instruments and components have a designated lifetime, many times they can be repaired, or replaced altogether with newer, cutting-edge technologies.

Following its installation in 1997 during Servicing Mission 2, STIS was used to determine the composition of celestial objects. By assessing the wavelengths of light emitted by distant objects, the spectrograph enabled astronomers to determine their characteristics. After seven long years of operational use, STIS experienced a power supply failure in 2004 and was put into “safe mode,” meaning that it is switched off but thermally protected.

Another valuable instrument in safe mode, ACS, was installed during the most recent servicing mission to Hubble in 2002. By using its wide field of view, astronomers were able to study the nature and distribution of galaxies more than ever before, revealing clues about how our universe was formed. However, in January of 2007, an electrical short caused two of the three cameras housed within ACS to fail. Scientists worldwide are excited about the possibility of regaining the capabilities of these instruments after Servicing Mission 4. 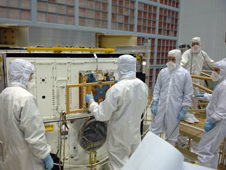 Astronauts practice installing Hubble’s new imaging camera, the WFC3, using the instrument’s handling aid. This crew aid will help control the 1,000-lb. instrument during on-orbit installation of the camera during Servicing Mission 4. Credit: NASA
> Larger image With the addition of these repairs to the mission's manifest, a whole new undertaking was thrust onto Goddard engineers. None of the tools developed for previous missions are suitable for repairing the unique interfaces of STIS and ACS because these tasks require a tool with low torque. Torque is the application of force where there is rotational motion or, more simply put, a turning or twisting force. Screws and fasteners can break if the torque on a drill is too high or the speed is too fast, which would cause serious setbacks for repair tasks.

“The two repair tasks we are doing on this mission require removing small screws or fasteners. These must be removed with very low torque. There are about 100 fasteners in one of the tasks, so we are building a space-qualified, low-torque screwdriver to remove them,” said McGuire.

Since the astronauts are working in space, if nothing else were done to “capture” the screws as they are removed, they would simply float away along with tiny metallic debris that is usually generated when screws are removed from metal. In order to protect Hubble’s sensitive interior and help the astronauts contain loose debris, Goddard tool engineers designed a very unique, clear plate that fits over all of the screws. The plate is marked so astronauts can easily identify individual fasteners, and designed so the fasteners and metallic debris will be captured under the plate. “This plate will make the astronaut’s job infinitely easier and will totally protect the telescope from potentially harmful debris,” said Justin Cassidy, the lead EVA Crew Aids and Tools designer for the Hubble Program.

For every Hubble mission, the flight crew plays a key role in helping to develop and refine the tools that will be used on orbit. Dive runs occurring at Johnson Space Flight Center’s Neutral Buoyancy Laboratory in Houston allow astronauts to practice using the tools underwater in what’s called a “zero-G” environment, which simulates the sensation of being in space.

During each of the dive runs, the astronauts rehearse their repair tasks using a full size mock-up of the telescope, which not only provides them practice for the spacewalks, but also gives them a chance to catch any problems they may have with tool design or operation. It’s not unusual for a number of redesigns to occur prior to the mission. But the missions often go without a hitch because of these on-the-ground tweaks to tool design.

“One of the things critical on any Hubble mission is limited spacewalk time,” said Jarosz. “Since this is the last scheduled repair mission to Hubble, we have to make every task as efficient as possible. And we want the crew to take full ownership of the designs we come up with so that they’re comfortable using the tools.”

“The best part of my job is seeing what the success of our efforts brings back to the public,” said McGuire. “Over the years I’ve had the opportunity to speak to hundreds of students at various education outreach events. To see the interest and excitement in their eyes when they learn about how astronauts service Hubble makes all the hard work worth it.”

> Read the other stories in the "Next Stop: Hubble" series Kelsey Paquin
NASA's Goddard Space Flight Center
› Back To Top