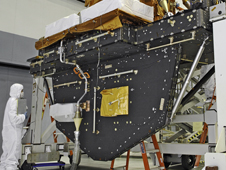 Engineers prepare the Super Lightweight Interchangeable Carrier (SLIC) for acoustics testing at Goddard. Acoustics testing ensures the carrier, and all its installed components, is capable of surviving the vibration and noise of a shuttle launch. Credit: NASA
> Larger image
Hubble engineers at NASA’s Goddard Space Flight Center in Greenbelt, Md. are ushering in a new era in spaceflight with successful design of the first of its kind composite equipment carrier.

The Super Lightweight Interchangeable Carrier, or SLIC, is slimmer, weighing only about half of conventional carriers, and stronger. With this new design, the Space Shuttle will be able to carry three times the payload, making room for additional scientific instruments and other components.

“SLIC is another great example of how out of the box thinking and new technology to improve Hubble is helping to pave the way for other NASA initiatives,” said Goddard’s Hubble Development Project Manager Frank Cepollina.

Although the main focus of the final Shuttle mission to Hubble is to deliver as much scientific and life-extending hardware as possible to the telescope, the new composite technology used to build SLIC is directly applicable to other spacecraft, launch vehicles and structures where weight is a critical consideration.

Typical carriers, which can span the entire width of the Shuttle’s payload bay, add thousands of pounds. Since space transport vehicles have a maximum weight limit, every pound trimmed from a payload is another one that can be reserved for scientific instruments and other cargo.

SLIC’s incredibly light weight frame stems from the innovative use of carbon fiber with cyanate ester resin and titanium metal matrix composites. These new composites are proving especially effective in space-flight applications, where the name of the game is maximizing a launch vehicle’s ability to efficiently lift mass into orbit.

Compared to aluminum and titanium, which are metals typically used in spacecraft and launch vehicle design, the composites used to build SLIC have greater strength-to-mass ratios. SLIC also features other attractive performance characteristics such as fatigue resistance, which means it is less susceptible to wear and tear.

What Lies Ahead for SLIC? 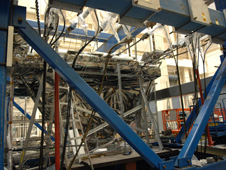 Engineers subjected the Super Lightweight Interchangeable Carrier (SLIC) to static loads testing during Spring 2007 at NASA’s Goddard Space Flight Center. This test was conducted to ensure the carrier is capable of surviving a shuttle launch, and on-orbit and landing loads while in the Shuttle.Credit: NASA
> Larger image SLIC will make its maiden voyage into space in 2009 aboard the Space Shuttle Atlantis when it lifts off for the famed Hubble Space Telescope.

Inside Goddard’s large cleanroom, engineers are busy configuring SLIC to carry the Wide Field Camera 3 science instrument, along with two new battery modules, which astronauts will install during the servicing mission.

“This new composite carrier is just the beginning,” said Mike Weiss, Hubble’s Technical Deputy Program Manager at Goddard. “As the pathfinder for the use of composites in human spaceflight, SLIC has established the benchmark for technology required for future space missions, including analysis, testing and verification.”

Following in the footsteps of SLIC’s development, future human and robotic exploration missions will benefit from the use of composite materials. The Hubble team’s extensive experience with composites will enable these future missions to experience greater leaps in performance.

A similar composite structure is slated for use on the Crew Exploration Vehicle (Orion) Launch Abort System. This 48-foot long, 36-inch diameter multi-stage rocket will allow a crew of astronauts to safely escape in the event of an emergency while still on the launch pad or through the atmospheric ascent of the Orion vehicle into Earth orbit.

Engineers for programs such as the Orion Crew Exploration Vehicle are currently in discussions with the Goddard engineers to learn how they succeeded with SLIC so they, too, can construct stronger, more efficient composites in the decades to come.

“Hubble and NASA are about the future,” said Cepollina. “Composite structures such as SLIC will play a vital role in the future of human space flight.”