Grow Text SizeShrink Text Size
Improving Hubble’s Space Armor
When astronauts return to Hubble for Servicing Mission 4 in 2009, they will be revamping and reenergizing the telescope for the final leg of its journey. One of the tasks they aim to complete is the installation of New Outer Blanket Layers, or NOBLs.

Since its deployment, Hubble’s thermal blankets have taken the brunt of the harsh space environment. Extreme temperature swings, solar radiation, and micro-meteoroids have been slowly degrading the telescope’s protective covering. By examining blankets returned from prior servicing missions, NASA engineers have determined much of the deterioration is actually cosmetic.

How the Blankets Protect Hubble
The primary purpose of Hubble’s thermal blankets is to protect Hubble’s sensitive components from the harsh environmental effects of space. The blankets do this by reflecting the sun’s energy during the daylight portion of Hubble’s orbit around the Earth, retaining just enough heat to keep the components from getting too cold during its night-time orbit, and protecting the telescope from radiation and orbital debris.

It is the meticulously designed construction of the thermal blanketing that enables it to withstand the dangers of space. Sixteen thin layers of dimpled aluminized Kapton material are covered by an outer aluminized Teflon shell, altogether measuring less than one-tenth of an inch thick. Many of Hubble’s components are extremely temperature-sensitive, so this insulation has been essential in allowing the telescope to operate as efficiently as possible. 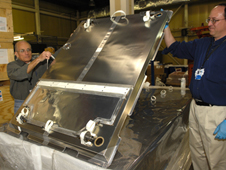 Goddard engineers Richard Strafella (left) and Larry Dell hold a New Outer Blanket Layer, or NOBL, which features a new external radiator panel. Astronauts will install this NOBL on Bay 8 of the Hubble Space Telescope during Servicing Mission 4.Credit: NASA
> View Larger Image The NOBLs to be installed during Servicing Mission 4 are different from the original multi-layer blanketing, but they will perform the same job. These consist of one layer of specially coated stainless steel foil trimmed to fit particular doors on Hubble’s instrument bay. Instead of removing and replacing old thermal blankets, astronauts will simply install the NOBLs over them, creating a new and improved outer layer of blanketing. This process is more time efficient than removing and replacing blankets altogether.

History of the Blankets
When NASA sent astronauts to Hubble for its first servicing mission in 1993, the thermal blankets were in pristine condition considering their three and a half years in space. The crew did not note any extensive damage during their spacewalks and small cracks were only visible in post-flight observations and photographs.

The big surprise came in 1997 when astronauts returned for the second servicing mission. Though it had only been a little over three years since Hubble was last serviced, the crew noted significant damage to the multi-layered blankets, with nearly 100 cracks measuring 5 inches or longer. The cracks had certainly not affected the operations of Hubble – ground telemetry had not indicated that thermal blanket deterioration was causing any significant problems in temperature regulation.

Without knowing how long it would be before they would return to the telescope for another mission, the astronauts took action to safeguard against further damage. Using classic NASA ingenuity, they fashioned four patches out of single-layer sheets of aluminized Teflon and two out of seventeen-layer blankets. Those patches are still in place today.

What Condition Are The Blankets In Now? 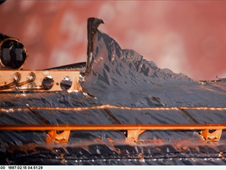 Shown here is one of several tears in the outer layer of Hubble’s Multi-layer Insulation blanket along the direct sun exposed side of the telescope. The astronauts first observed the tears in 1997 during Servicing Mission 2. Credit: NASA
> View Larger Image Up until now Hubble had never gone more than four years without a servicing call, so NASA engineers are busy analyzing data that is helping them predict the current condition of the blankets.

According to Mike Weiss, Deputy Program Manager/Technical for the Hubble Space Telescope Program at NASA’s Goddard Space Flight Center, “We fully expect the thermal blankets to look worse than they did when we last departed Hubble in March of 2002 at the completion of Servicing Mission 3B.” “With knowledge gained from testing returned blanket material and from astronaut debriefs, NASA has worked hard to design NOBLs that will protect the most damaged and sensitive areas of the telescope,” Weiss said. “Goddard engineers have also trained the flight crew regarding how to deal with both expected and unanticipated blanket conditions.”

One Telescope’s Blankets, Another Telescope’s Treasure
A positive result of the blanket’s degradation is what it enables NASA engineers to discover about material degradation during long-term space exposure. They have examined blankets returned from all previous servicing missions and analyzed them to understand the mechanisms that cause blanket degradation. They used this information to improve thermal protection for Hubble as well as other spacecraft such as the James Webb Space Telescope, the International Space Station, and vehicles that are being designed for NASA’s Exploration Program.

Improved thermal blanketing will not only extend Hubble’s mission life, but also help prolong the mission span of other telescopes currently in development.

New Blankets a Perk, Not a Necessity
There are a slew of tasks slated for Servicing Mission 4, so there is no guarantee there will be enough time to install all three NOBLs. Other tasks more vital to the mission are ranked higher on NASA’s list of priorities, such as installing new instruments, batteries, and gyroscopes. Spacewalking time is at a premium and distinctions like this must be made. As extensive as the damage may seem to the untrained eye, blanket cracks are mostly cosmetic. With so many layers, cracks in the outer surface of thermal blankets have very little effect on internal temperatures. It would be a very long time before the damage could be severe enough to stop Hubble from producing its characteristically amazing science.

In fact, blanket degradation is only one part of a two-part issue in temperature regulation for Hubble. The other issue comes from internally rising temperatures. Throughout the years, as more powerful scientific instruments have been installed, the data volume of Hubble’s electronics has increased, meaning they are doing work double time to accommodate more data, and some new electronics have been installed. Since electronics generate heat as they work, the increased data volume combined with new and upgraded electronics has caused a slight warming trend in some of Hubble’s electronic compartments.

In addition to protecting Hubble’s exterior, some of the NOBLs will enable cooling of these electronic bays with a built-in radiator. Although NOBL installation is not a must to keep the telescope operational, they would permit additional operational margins.

If astronauts are able to install the NOBLs, this explorer telescope will have the best protection possible for its precious cargo of scientific instruments. But even if this task cannot be performed, expect to see Hubble trekking steadily along, setting a pace for discovery that has yet to be matched.

> Read the other stories in the "Next Stop: Hubble" series

Kelsey Paquin, PAO
› Back To Top