Competition for time on the telescope is extremely intense. Potential users must show that their observations can only be accomplished with Hubble’s unique capabilities and are beyond the capabilities of ground-based telescopes.

Telescope observing time is measured by the number of orbits required for a successful observation. Programs requiring many orbits get much greater scrutiny. The observations must address a significant astronomical mystery. 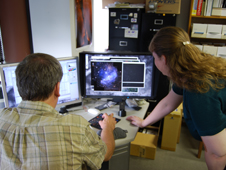 Zolt Levay (left), senior image processor, and Vanessa Thomas, informal science specialist, review data retrieved from the Hubble Space Telescope archive, which are processed and used to construct its science images. Levay and Thomas work for the Space Telescope Science Institute’s Office of Public Outreach in Baltimore.  Image credit: STScI
> View Larger Image The demand for time on Hubble is so great there are typically six times as many observing proposals for the telescope as those that actually are selected. This is because Hubble can do breakthrough astronomical research that simply can’t be done from ground-based telescopes.

Calls for proposals to use HST are issued annually. The time allocated for a cycle lasts approximately one year. Proposals are divided into several categories such as solar system objects, star formation, black holes in active galaxies, and the far universe.

There are several types of proposal that "fly" first class, tourist class, and standby. In the category known as "Director's Discretionary Time," the STScI director allocates up to 10% of total observing time. Astronomers can apply to use this time at any time of year. It is typically awarded for study of unexpected phenomena such as supernovae. Historically, STScI directors have allocated large percentages of their time to special programs that are too big to be approved for any one astronomy team.

This allowed for the execution of the Hubble Deep Field and Hubble Ultra Deep Field, humankind’s farthest visible light views into the universe.

The proposal process is organized by STScI. The GO proposals are peer reviewed annually by the Time Allocation Committee (TAC), which is broken up into selected disciplines: planetary science, stellar physics, active galaxies, etc. The committee looks for the best possible science that can be conducted by HST and seeks a balanced program of small, medium, and large number of orbits. The STScI director then approves the final selection and the winning lead investigators on the research teams are notified.

STScI planning and scheduling personnel assemble an observing calendar for executing winning programs. Hubble whirls around Earth completing one orbit approximately every 90 minutes, so everything must be pre-planned. This is made even more complex because targets may be visible at only certain times of the year. The carefully assembled calendar maximizes the telescope’s observing efficiency by interleaving observations.

"Preparing observations and scheduling them on HST is such a complex process, it's astounding that any of them are successful. And yet, not only have these observations been successful over the years, they have also allowed us to discover more about our universe that we ever imagined existed," said Denise Taylor of STScI’s operations and engineering division.

Because HST is not in continuous communication with the ground, a to-do list of observations is uploaded in packets several times a week for the telescope to automatically execute. Images and other data are stored in an onboard solid-state computer memory and then down-linked to Earth at appropriate communications opportunities with the Tracking and Data Relay Satellite System.

The data stream into STScI where they are calibrated and archived. The GO for the program receives an e-mail notice that his or her observation is complete and ready to be downloaded from the STScI archive. The lucky astronomer has to start analyzing the data quickly and publish a science paper. That is because the astronomical observations are proprietary for only one year. After that time, other astronomers can look at the data and do their own research. Astronomers using Hubble data have published more than 8,000 scientific papers, making it one of the most productive scientific instruments ever built.

> Read the other stories in the "Next Stop: Hubble" series