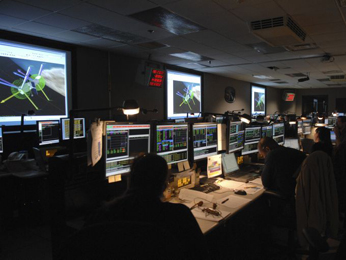 Engineers look on in the Space Telescope Operations Control Center as commands are sent to the SIC and DH.   Credit: NASA   > View Larger Image

During the night of Oct. 15, Space Telescope Operations Control Center engineers at NASA’s Goddard Space Flight Center turned on and checked out Side ‘B’ of Hubble’s Science Instrument Control and Data Handling (SIC&DH) system.

Subsequently, the Advanced Camera for Surveys (ACS), Wide Field Planetary Camera 2 (WFPC2) and Near Infrared Camera and Multi-Object Spectrometer (NICMOS) instruments were retrieved from safe mode to establish that each has a working interface to the Side B SIC&DH. The instruments were then commanded back into safe mode, and will remain in that state until the SI C&DH begins issuing commands to them later today.

Scientists at the Space Telescope Science Institute in Baltimore should complete their review of the internal exposures by noon on Friday, October 17. This procedure involves collecting and comparing baseline exposures previously supported by Side A of the SI C&DH to new exposures supported by Side B. This review will be one last check of the “transparency” (non-impact) of switching to the redundant spacecraft electronics the Hubble team activated on Wednesday.