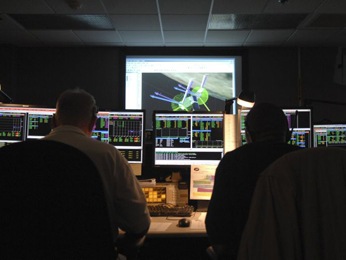 Two engineers in the Space Telescope Operations Control Center sit at consoles during the switch to Side B of the SIC and DH.   Credit: NASA   > View Larger Image

The Hubble Space Telescope team completed switching the required hardware modules to their B-sides about 9:30 a.m. this morning and received telemetry that verified they had good data. Everything at this point looks good.

The 486 computer on Hubble was reloaded with data around noon and successfully performed a data dump back to the ground to verify all the loads were proper. At 1:10 p.m. this afternoon the team brought Hubble out of safe mode and placed the 486 computer back in control. Late this afternoon, Gyro #4 (which was needed for safe mode) will be turned off.

The team will reconfigure Side B of the Science Instrument Command & Data Handling (SIC&DH) computer later today and verify it is functioning properly.

Around 6 p.m. this evening the spacecraft will begin executing a pre-science command load, which involves sending normal commands to control the spacecraft and resume communications satellite tracking with the HST high gain antennas.

“We won’t know if we’ve been completely successful until around midnight Wednesday when we demonstrate that the SIC&DH Side B is talking to the instruments and able to pass data to the ground,” said HST Operations Deputy Project Manager Keith Kalinowski at NASA’s Goddard Space Flight Center in Greenbelt, Md.