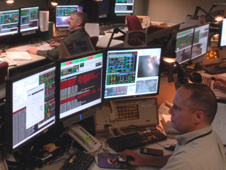 The Hubble team today received approval from officials at NASA Headquarters to reconfigure a failed data handling unit on Hubble to begin operations on a redundant side of the unit, which should restart science operations by this Friday if successful.

The Science Instrument Command and Data Handling unit (SIC&DH), which had been operating on side A since launch in 1990, failed on Sept. 27, shutting down most science operations. Hubble engineers have been working over the past few weeks to develop a plan to switch operations to the redundant side B of the SIC&DH.

"We expect to see the first science data by midnight on Thursday (Eastern time, Oct. 16), with Hubble back in its science mode on Friday morning," said Art Whipple, manager of the Hubble Space Telescope Systems Management Office at Goddard, in a media telecon earlier today.

The failure in the SIC&DH was isolated in one of the unit's Science Data Formatters. There are two SDFs in the SIC&DH; the one that failed and a second which has been kept as an unpowered back-up. There are no indications that this failure affected any other components in the SIC&DH, the science instruments, or the rest of the orbiting observatory.

In its current configuration, Hubble can perform all of its normal health, safety and housekeeping functions. However, it can perform only a limited amount of science, using the Fine Guidance Sensors, which can precisely measure positions of astronomical objects. The fine guidance sensors do not communicate to the earth through the SIC&DH unit.

Starting on Wed., Oct. 15, the Hubble team will reconfigure Hubble to use the redundant SDF in the SIC&DH, and six redundant associated components in the spacecraft data management systems (DMS), to restore science operations. Five of the six redundant components in the DMS that will be brought on-line also have not been powered since 1990. The command procedures to accomplish this transition have been thoroughly tested at Goddard.

"We are confident that all preparations are complete. The team is ready to go," said Whipple. "We and everyone else look forward to a successful transition and the restoration of Hubble science instrument operations."