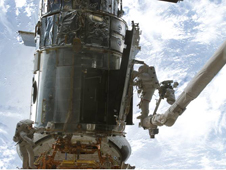 Sept. 30, 2008
Due to the significant Hubble Space Telescope malfunction that occurred over the weekend affecting the storage and transmittal of science data to Earth, NASA will evaluate the investigation results before fully determining the impact to launch of the STS-125 servicing mission.

Under consideration is the possibility of flying a back-up replacement system as part of the payload, which could be installed during the servicing mission. The back-up unit will need to be checked out and tested at Goddard Spaceflight Center in Greenbelt, Md., and as a result, won’t be ready to be delivered to Kennedy Space Center in Florida until the first week in January.

NASA now will fly space shuttle Endeavour's STS-126 mission to the International Space Station first, with the STS-125 servicing mission moving into 2009. Endeavour is targeted to launch Nov. 16. Managers are looking into moving the target date up a couple of days if possible.

The malfunctioning system is Hubble's Control Unit/Science Data Formatter - Side A. Shortly after 8 p.m. on Saturday, Sept. 27, the telescope's spacecraft computer issued commands to safe the payload computer and science instruments when errors were detected within the Science Data Formatter. An attempt to reset the formatter and obtain a dump of the payload computer’s memory was unsuccessful.

Additional testing demonstrates Side A no longer supports the transfer of science data to the ground. A transition to the redundant Side B should restore full functionality to the science instruments and operations.

The transition to Side B operations is complex. It requires that five other modules used in managing data also be switched to their B-side systems. The B-sides of these modules last were activated during ground tests in the late 1980’s and/or early 1990, prior to launch.

The Hubble operations team has begun work on the Side B transition and believes it will be ready to reconfigure Hubble later this week. The transition will happen after the team completes a readiness review.

Hubble could return to science operations in the immediate future if the reconfiguration is successful.