Grow Text SizeShrink Text Size
NASA, IMAX Team up on Hubble Servicing Mission
Thanks to cooperation between NASA, IMAX Corporation, and Warner Bros. Pictures, the IMAX 3D camera is scheduled for a journey to the Hubble Space Telescope in early 2009.

The camera will accompany astronauts on mission STS-125 and capture film for a new production that will chronicle the telescope's life story. The film is set for release in early 2010 and marks Warner Bros. Pictures' first venture into space.

"We are thrilled that people from around the world will experience this vital servicing mission from a front-row seat," said NASA Deputy Administrator Shana Dale. "Audiences will be mesmerized as they are transported to the distant galaxies of the universe."

IMAX's long-standing partnership with NASA has enabled millions of people to travel into space through a series of award-winning films. The IMAX 3D camera made its first space voyage in 2001 for the production of "Space Station 3D." That film took audiences on a virtual tour of the International Space Station. 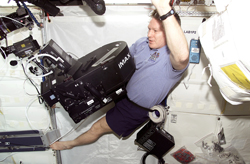 "A decade ago we made a film that briefly touched on the subject of Hubble, but back then its first images were just coming in," said IMAX producer and director Toni Myers. "Today, we have Hubble's entire phenomenal legacy of data to explore. With IMAX 3D, we can transport people to galaxies that are literally 13 billion light years away. Real star travel is here at last."

The 3D camera will watch as astronauts work on Hubble during the 11 days of Servicing Mission 4, the last scheduled trip to the telescope. The space shuttle will rendezvous with Hubble on the third day of the flight. Using the shuttle's mechanical arm, the telescope will be placed on a work platform in the cargo bay. Five separate space walks will be needed to accomplish all of the mission objectives, which include installing new instruments and guidance sensors.

"Our original IMAX 3D releases have already put audiences in the driver's seat of a NASCAR racecar and taken them swimming with some of the most exotic undersea creatures on earth, and now we look forward to transporting them to the far reaches of the universe," said Dan Fellman, president of Warner Bros. domestic distribution. "Warner Bros. and IMAX have collaborated on 20 films over the last four years, and we are excited to share our next endeavor -- the IMAX 3D space film -- with our audience."

The Hubble Space Telescope is an international cooperative project between NASA and the European Space Agency.