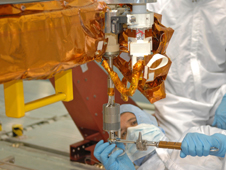 During Crew Fam 4 at NASA Goddard Space Flight Center, EVA astronaut Mike Good practices manually overriding a mechanism on the Flight Support System using the flight ratchet wrench. Credit:NASA
> Larger image
As part of their training for the upcoming Servicing Mission 4 to the Hubble Space Telescope (SM4), the flight crew periodically come to NASA's Goddard Space Flight Center in Maryland to participate in a series of Crew Familiarization -- shortened to "Crew Fam" -- activities. During these mission dress rehearsals, they have the unique opportunity of seeing all of the actual flight hardware, in flight configuration, before they arrive on orbit together on board Space Shuttle Atlantis for the last servicing call to Hubble. The latest Crew Fam at Goddard was held the week of April 28.

In addition, the flight crew participate in rehearsals of all of the mission's Extra Vehicular Activities (EVAs). These dress rehearsals, held inside the world's largest cleanroom, give SM4 astronauts the chance to perform fit checks (checks to make sure hardware properly fits in containers or will fit together in the actual telescope as intended) of the flight hardware into the Shuttle transportation systems that will carry the hardware to orbit; fit checks of flight instruments into the mechanical ground simulator of the actual Hubble Telescope; and actually operate flight tools on all flight interfaces. 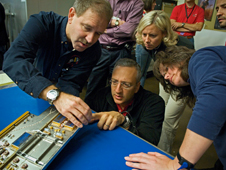 Spacewalking astronauts John Grunsfeld and Drew Feustal carefully watched Hubble's powerful new imaging camera, the Wide Field Camera 3 (WFC3), being inserted into its Shuttle "suitcase" carrier during Crew Fam 4 at the Goddard Space Flight Center. During this activity, the astronauts operated all of the instrument's latching interfaces and observed mission procedure simulations. The WFC3 will replace the Wide Field/Planetary Camera 2 instrument and will expand Hubble's high resolution imaging capability into the near ultraviolet, through the visible, and into the near infrared regions of the electromagnetic spectrum. 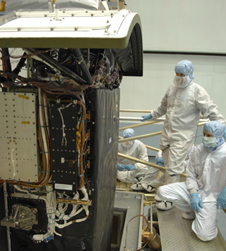