According to Mike Kienlen, Deputy Project Manager for the HST Development Project, the PSR proves the project is on schedule and shows, “that we are ready to support the shipments of flight hardware and Government-supplied equipment to the launch site.” The first of several shipments left the Center during the early morning hours of July 14, destined for Kennedy Space Center in Florida. 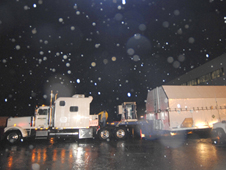 
When astronauts complete all five planned EVAs, or spacewalks, for this mission, Hubble will be reborn.

“Servicing Mission 4 marks the apex of not only the scientific capabilities of Hubble, but the apex of NASA’s capabilities,” explained Preston Burch, Associate Director of the Astrophysics Projects Division and HST Program Manager, at Goddard. “In addition to making enormous gains in our understanding of the universe we live in, we have learned a lot in the areas of technology development, engineering, and management.”

Space Shuttle Atlantis is currently on track for an October 8 launch from Kennedy. Designated as STS-125, it will carry a crew of seven astronauts to the world’s most famous telescope for an 11-day mission that will give Hubble new eyes on the universe for many years to come.

For more information about Hubble and SM4, visit:
http://www.nasa.gov/hubble Susan Hendrix
› Back To Top