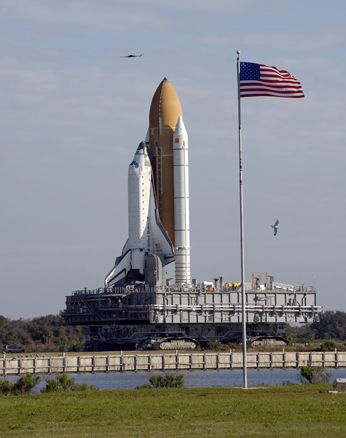 Space shuttle Atlantis is scheduled to roll out to Launch Pad 39A at NASA's Kennedy Space Center in Florida on Tuesday, March 31, as preparations for the STS-125 mission move forward. Atlantis is targeted to lift off May 12 to service NASA's Hubble Space Telescope.

The first motion of the shuttle out of Kennedy's Vehicle Assembly Building is scheduled for 12:01 a.m. EDT. The fully assembled space shuttle, consisting of the orbiter, external fuel tank and twin solid rocket boosters, was mounted on a mobile launcher platform and will be delivered to the pad atop a crawler-transporter. The crawler will travel slower than 1 mph during the 3.4-mile journey. The process is expected to take approximately six hours.

NASA Television will provide live coverage of Atlantis' rollout to the launch pad beginning at 7 a.m. Video highlights will air on the NASA TV Video File.