The entire Servicing Mission 4 flight crew conducted their last crew training activity at NASA’s Goddard Space Flight Center on August 5 and 6 as part of their preparations for the final servicing call to the Hubble Space Telescope in early October. 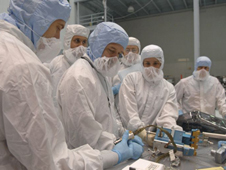 The crew participated in six such training activities, known as crew fams, since they were assigned to this historic flight. During each trip to Goddard, the crew received classroom briefings on the operation of flight hardware and the spacewalking procedures that will be used during the mission’s spacewalks, called ExtraVehicular Activities. After the classroom sessions, they entered the world’s largest clean room where they had an opportunity to participate in flight hardware fit checks and operate the flight tools and crew aids that will be used on-orbit.

It is in this unique facility where all 22,000 pounds of flight hardware that will fly on the Space Shuttle Atlantis goes through the final stages of integration and test just prior to being shipped to the Kennedy Space Center for launch processing. It is the only facility where the flight crew has the opportunity to train on the actual flight hardware.

In addition to crew fams, the crew trains in the Neutral Buoyancy Laboratory and other training facilities in Houston. By integrating all of their training experiences, the Hubble astronauts will be thoroughly prepared to service Hubble one last time, leaving it more powerful and capable than ever before.


For more information about Hubble and SM4, visit  www.nasa.gov/hubble 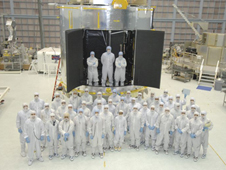 The SM4 Flight Crew with the team of Goddard engineers and technicians who have worked with them during the 6 crew familiarization sessions at the Goddard Space Flight Center. The team is posing in Goddard's large, class 10,000 clean room where the flight crew practiced EVA procedures and tool operations for the last servicing call to the Hubble Space Telescope.    Credit: NASA > View Larger Image 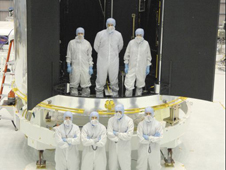 The SM4 Flight Crew in the Goddard clean room during the final flight hardware crew familiarization and training activity at Goddard in preparation for SM4.    Credit: NASA> View Larger Image