Servicing Mission 4 (SM4) is the final Shuttle mission for the Hubble Space Telescope. Astronauts will bring new instruments to Hubble along with gyros, batteries and other components crucial for the telescope’s continued success through the year 2014.


With more than 18 years of historic and trailblazing science already accomplished, Hubble will be reborn with SM4. The mission will feature the installation of two new cutting-edge science instruments to enhance Hubble’s capabilities by large factors, the refurbishment of Hubble’s subsystems and extension of operating life to at least 2014. Astronauts will also attempt the first ever on-orbit repair of two existing instruments – the Space Telescope Imaging Spectrograph and the Advanced Cameras for Surveys. 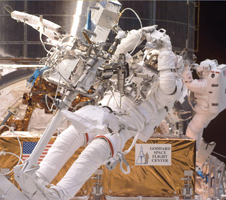 Credit: NASA
> Larger Image
SM4 was originally planned for 2004, but was postponed after the Columbia Space Shuttle tragedy in 2003 and then canceled in light of Agency safety concerns. Following the successful recovery of the Shuttle program and a re-examination of SM4 risks, NASA approved one last servicing mission. The reinstated SM4 is currently scheduled for flight in May 2009.

The new instruments are the Cosmic Origins Spectrograph and Wide Field Camera 3. A refurbished Fine Guidance Sensor will replace one degrading unit of three now onboard, and will maintain a robust ability to point the telescope. Astronauts will also install gyros, batteries and thermal blankets to ensure Hubble functions efficiently for a minimum of five years after servicing.

, or COS, will be the most sensitive ultraviolet spectrograph ever flown on Hubble. COS will probe the "cosmic web" - the large-scale structure of the universe whose form is determined by the gravity of dark matter and is traced by galaxies and intergalactic gas. COS will explore how the "cosmic web" evolved from ancient times. COS will also sample the chemical content and physical state of gas in distant galaxy halos, providing important insight into the building process of early galaxies and the production of elements heavier than hydrogen and helium over cosmic time. Required to accomplish these goals is the extraordinary sensitivity of COS’s far-ultraviolet channel—a factor more than 30 times greater than that of previous spectroscopic instruments for the detection of extremely low light levels. A two-fold enhancement will be offered by COS’s near-ultraviolet channel.


Wide Field Camera 3, or WFC3, will have a broad range of inquiry, from early and distant galaxies beyond Hubble’s current reach, to more nearby galaxies with "stories to tell" about their star formation histories, to the planets in our solar system. Along the way, "dark energy" will be seriously probed by WFC3. The instrument’s key feature is its ability to span the electromagnetic spectrum from the near ultraviolet through the optical (to which our eyes are sensitive), and into the near infrared. WFC3 is the only Hubble instrument with this "panchromatic" capability. WFC3’s "UVIS" detector—sensitive to near ultraviolet and optical light—will provide a 35X improvement in discovery efficiency in near ultraviolet and blue light. The near infrared detector will provide a 15-20 times improvement in discovery efficiency over the current NICMOS instrument. WFC3’s strengths complement those of ACS should it be repaired. Working together these two instruments could create the greatest era in the spectacular history of Hubble imaging.

Fine Guidance Sensor, or FGS, will extend the life of Hubble’s "pointing control system", of which three FGSs are a key component. Two FGSs are currently degrading, and the new FGS will replace one of them, making for two completely healthy units—all that’s needed for pointing Hubble. The third FGS provides additional target pointing efficiency and redundancy. The FGSs and gyroscopes together produce extraordinary stability—0.007 arcseconds of "jitter"—akin to holding a laser beam on a dime 200 miles away. The FGSs also provide capability for astrometry— the detailed study of stellar dynamics and motions—enabling the detection of close binary stars and star-planet systems.

Subsystem Components
Gyroscopes — Hubble was designed to use three of six onboard gyroscopes to meet its very precise pointing requirements, with the other three held as spares. Gyros have limited lifetimes, and three of the six (all installed in late-1999) are currently working. Following a thorough analysis and testing by engineers, it was determined that Hubble could operate productively on two gyros. After the implementation of three new control modes in Hubble’s main computer, and major changes to Hubble’s planning and scheduling system at the Space Telescope Science Institute, two-gyro operations began in 2005. By operating on two gyros, with the other gyro turned off (until needed), it is expected that Hubble can continue science operations through the end of 2008. With SM4 scheduled for mid-2008, a fresh set of six new gyros is clearly needed to make the most of Hubble’s new science instruments and lifetime peak performance through 2014.

Battery Modules— The six batteries currently on board the observatory are all original equipment. After more than 18 years of continuous operation the batteries are degrading. In the current condition, the Hubble electrical power system requires careful management of system state of charge to assure adequate power margins for all operational scenarios. This will become more difficult, and will start to constrain operations. The replacement of the two Hubble battery modules (each containing three batteries) will rejuvenate the electrical power system. This, combined with the power system enhancements made in Servicing Mission 3B, will result in ample power margins for the remainder of Hubble’s lifetime.

New Outer Blanket Layer — Stainless steel sheets are slated to be installed on Hubble’s exterior to provide additional thermal protection to some equipment bays, replacing the existing multilayer insulation which has slowly degraded over time due to the harsh environment of space.

Repairs and a Future Rendezvous
Space Telescope Imaging Spectrograph — STIS, the most versatile spectrograph ever to fly on Hubble, ceased operations in August 2004 due to failure of its power supply. In order to restore STIS to operational status, astronauts may attempt an on-orbit replacement of a failed electronics board inside one of its main electronics boxes. COS and STIS are highly complementary and would work effectively together to provide a full set of spectroscopic tools for astrophysical research.

Advanced Camera for Surveys — ACS has produced many of the most popular and dramatic images from the Hubble Space Telescope over the last few years, but in January 2007 the instrument had a serious power failure which caused the three observing channels, the Wide Field Channel, The Solar Blind Channel and the High Resolution Channel, to cease operation. The Solar Blind Channel was returned to service in February 2007. Astronauts will attempt to repair the Advanced Camera for Surveys by replacing the CCD electronics box in the Wide Field Channel and power this box with a replacement low voltage power supply. If this repair is successful, ACS will again provide the most sensitive images available at visible and near-infrared wavelengths.

Soft Capture Mechanism — The SCM is a compact device that, when attached to the Hubble aft bulkhead, will enable and assist in the safe de-orbit of the Hubble Space Telescope at the end of its useful life. This circular mechanism has structures and targets that will allow a next-generation vehicle to more easily capture and guide the telescope into a safe controlled re-entry.

Science Instrument Command and Data Handling — The SI C&DH unit, one of two computers, keeps all science instrument systems synchronized, helping to process, format and temporarily store information on HST’s data recorders or transmit science and engineering data to the ground. The second computer, the Advanced Computer performs onboard computations and handles data and command transmissions between all non-science telescope systems and the ground system. On September 27, 2008, the SI C&DH Side-A electronics failed. The redundant Side B electronics were brought online and HST resumed science operations. Replacement of the SI C&DH unit will restore redundancy to the to the electronics that control and format science data for Hubble’s five science instruments.