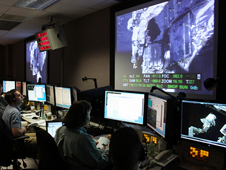 Image above: Personnel in the STOCC watching the monitors during the fifth and final EVA. Image credit:NASA The fifth and final partnership between a space shuttle crew and the Hubble Space Telescope is in its final hours. With the completion of today’s spacewalk, Hubble is now ready to continue its exploration of the cosmos with a full complement of science instruments.

Over the course of the mission’s five spacewalks, the crew added two new science instruments, repaired two others and replaced hardware that will extend the telescope's life at least through 2014. The five spacewalks lasted 36 hours and 56 minutes all together. There have been 23 spacewalks devoted to Hubble, totaling 166 hours and six minutes.

While activities here in the STOCC in support of the telescope and the space shuttle are nearing a conclusion, the science mission orbital verification work involving detailed checkouts, alignments and focusing of the new instruments is expected to take several months to complete.

Hubble scientists expect the first "new" images to be released in September.