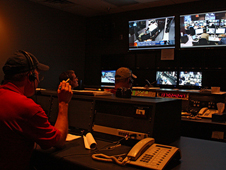 Image above: The control room, during the live broadcast of STOCC Update. Image credit:NASA Very early on Sunday morning, word came from functional test analysis that yesterday’s repair activities on the Advanced Camera for Surveys had achieved the prime objective of the effort—restoration of the instrument’s Wide Field Channel (WFC). Along with the High Resolution Channel (HRC), WFC became inoperable in January, 2007 after a high-energy electrical short occurred on Side 2 of the instrument and took down both channels. Since ACS’s installation on Hubble in 2002, WFC was responsible for more than 70% of ACS’s observing time and was in far greater demand than either HRC or the third ACS channel—the Solar Blind Channel (SBC, which survived the January 2007 electrical event.

The repair solution executed on Saturday’s space walk was aimed directly at WFC restoration, but there was a hope that it might also bring HRC back to life through a process called "back-powering." Due to an electrical short that occurred in 2006 on Side 1 of the instrument, however, HRC did not return to operability. HRC restoration was always considered a possible "extra", not the main objective which was WFC. In the upcoming Hubble observing cycle, WFC claims 83% of ACS’s observing time as compared to only 15% for HRC. HRC’s planned time will now be reassigned to other Hubble instruments.

WFC restoration achieves the objective of ACS repair, and the effort is regarded as having been fully successful.

Some issues with removing bolts on a handle on the telescope delayed the start of STIS repairs but Massimino and Good were eventually able to gain access to the inside of the science instrument and make all of the planned repairs.

At 4:30 p.m., with a new power supply card installed, flight controllers in the Space Telescope Operations Control Center at Goddard began an "aliveness" test to verify current was flowing to the instrument. Just before 5 p.m. EDT, word came that STIS had indeed passed its aliveness test and the STOCC team is currently performing the functional test.

Because work on STIS repair took longer than anticipated, Mission Control in Houston informed Atlantis’ crew that the planned task with the New Outer Blanket Layers (NOBLs) that had been targeted to be part of EVA-4 would not be conducted.

Mission managers are now considering how the Sunday NOBL work can be incorporated into the fifth and final space walk. Other NOBL thermal material work is already on John Grunsfeld and Drew Feustel’s "to-do" list for Monday.

The main tasks for Grunsfeld and Feustel on Monday will be the installation of the second set of batteries, installing a refurbished Fine Guidance Sensor unit and placing the NOBL thermal material on the outside of the telescope.