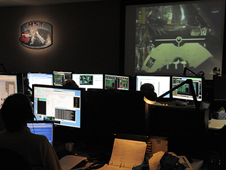 Image above: An engineer monitors activities on the large screens at the Space Telescope Operations Control Center. Image credit:NASA With the completion of the second STS-125 spacewalk today, the three science priorities for Hubble on the final shuttle servicing mission have already been met: the installation of a new science instrument, a new command and data handling unit and six new gyros.

Mission specialists Michael Good and Mike Massimino installed three Rate Sensor Units (RSUs), with a pair of gyros in each, and the first of two new battery module units during a spacewalk that lasted just under eight hours.

Good and Massimino were not able to get one of the three prime RSUs into its slot but were able to install a spare, giving Hubble the desired full complement of gyros. The gyros are used to change the orientation of the telescope and keep it fixed on a particular astronomical target during observations.

Good and Massimino removed one of the original battery modules from Bay 2 of the telescope and replaced it with a new unit. The other batter module is scheduled to be replaced by mission specialists John Grunsfeld and Andrew Feustel on Monday, May 18. The batteries provide power to the telescope when Hubble passes into Earth’s shadow and its solar arrays are not exposed to the sun.

On Saturday Grunsfeld and Feustel will perform the mission’s third spacewalk. They will install the mission’s second new science instrument, the Cosmic Origins Spectrograph (COS), and will repair the Advanced Camera for Surveys (ACS) unit.

COS won’t capture the majestic visual images that Hubble is known for (a job reserved for Wide Field Camera 3, installed on the first spacewalk); rather it will break up light into its individual components, slightly similar to a prism, in a process called spectroscopy. COS is designed to study the large-scale structure of the universe and how galaxies, stars and planets formed and evolved. It will help determine how elements needed for life, such as carbon and iron, first formed, and how their abundances have increased over the lifetime of the universe.

ACS was installed on Hubble during Servicing Mission 3B in 2002. An electronics failure in January 2007 rendered inoperable the two most-used science channels, and ACS currently runs on one remaining channel. The repair attempt has a goal of restoring both of the inoperable channels while preserving the third, bringing ACS back to full capability. Never before has such a repair effort been attempted.

The third spacewalk of the mission is targeted to begin at approximately 9:15 a.m. ET on Saturday morning.