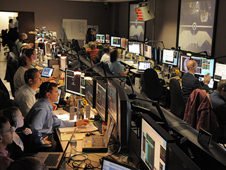 Image above: Engineers at the Space Telescope Operations Control Center. Image credit:NASA With the first of the five planned spacewalks completed, two of the three top mission priorities have already been met with the installation of a new science instrument and a new command and data handling unit.

The spacewalk, which lasted a little over 7 1/2 hours, saw the installation of the new Wide Field Camera 3 science instrument and a new Science Instrument Command and Data Handling Unit. Both WFC-3 and the SI C&DH passed their "aliveness" tests, which essentially means the devices powered on correctly. The WFC-3 also passed its functional test, meaning the capabilities of the instrument itself were tested. The SI C&DH unit has also received an initial OK on its functional test, pending final review of data sent down to the ground.

On Friday, May 15, the two main objectives during the second STS-125 spacewalk are the installation of new gyroscopes and new batteries, both of which will contribute to extending Hubble’s operating life.

After leaving the airlock and completing their initial payload bay set-up work, astronauts Mike Massimino and Mike Good will first focus their attention on replacing all six of Hubble’s gyroscopes, which are needed to point the spacecraft.

Gyroscopes — gyros, for short — measure rates of motion when Hubble is changing its pointing from one target to another, and they help control the telescope’s pointing while scientists are observing targets.

Each gyro is packaged in what is called a Rate Sensor assembly. The assemblies are packed in pairs inside boxes called Rate Sensor Units (RSUs).

It is the RSU that astronauts actually change when they replace gyros, so the gyros are always replaced two at a time. Massimino and Good will replace all three RSUs on the telescope during the second spacewalk, giving Hubble six brand new gyros for future telescope operations.

Previously, Hubble used three gyros at a time to conduct science with the others functioning as spares. However, after substantial changes to Hubble’s pointing control software, only two gyros are now needed.

These batteries provide all the electrical power to support Hubble operations during the night portion of its orbit. The telescope’s orbit takes roughly 96 minutes, about 60 minutes of which are in sunlight and 36 minutes, in Earth’s shadow.

During Hubble’s daytime period, the solar arrays provide power to the electrical equipment. They also charge the spacecraft’s batteries, so that the batteries can power the spacecraft during the night portion of each orbit. All six batteries are normally used at the same time.

Now 19 years into its mission, Hubble’s current nickel-hydrogen batteries have lasted more than 13 years longer than their designed orbital life — longer than those in any other spacecraft located in low Earth orbit.

It’s now one down and four to go in terms of spacewalks that will help extend the telescope’s life and its observation capabilities.