Instrument and Repair Overview
STIS is a highly versatile instrument with a proven track record. Its main function is spectroscopy—the separation of light into its component colors (or wavelengths) to reveal information about the chemical content, temperature and motion of planets, comets, stars, interstellar gas and galaxies. A key feature of STIS is its ability to produce the spectrum of spatially extended objects, such as galaxies, covering many points across the image simultaneously. This is why it is called an “imaging spectrograph.” The instrument is sensitive to a wide range of wavelengths of light, spanning from the vacuum ultraviolet through the optical to the near infrared, Although spectrographs generally do not produce beautiful images like Hubble’s cameras, the data they provide are absolutely essential to understanding the physical properties of the material universe – they put the “physics” in astrophysics. At the time when operations suspended in August of 2004, STIS science constituted about 30% of the Hubble observing program. 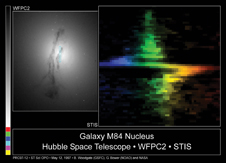 STIS spectrum on right reveals rapid star motions at galaxy center, indicative of a supermassive black hole.
Credit: NASA
> Larger Image
To repair STIS, astronauts will perform a spacewalk to replace a low voltage power supply board which contains a failed power converter. The repair is straightforward but requires diligence, and Hubble engineers have designed special tools for the job. If successful, the repair effort will restore one of two fully redundant electronic chains (or “sides”) of the instrument. Both were unusable after August, 2004.

The basics of the task are these — after installing a “fastener capture plate” over the top of a STIS electronics access panel, astronauts will use a power tool to remove the 111 fasteners (screws) that attach the panel to STIS. The plate will ensure that the small fasteners are captured without astronauts having to grasp and stash them with gloved hands.

After removing the panel (with capture plate and fasteners attached), the astronauts will remove the failed power supply card and click in the new one, much like replacing a circuit board on a computer. A new, simplified panel will then be installed over the open electronics cavity—only this time 111 fasteners will not be required. By throwing only two levers, the astronauts will latch the new panel securely into place.

The Instrument
STIS has three detectors, each with 1024x1024 pixels. There’s a CCD (Charge Coupled Device) for detecting optical and near-infrared light, and two MAMA (Multi-Anode Microchannel Array) detectors for detecting near-(lower energy) and far-(higher energy) ultraviolet light. A limited filter set supports imaging, but STIS’s heart is spectroscopy, which is enabled by a diverse set of gratings ahead of the detectors in the optical chain.

Gratings, like the more familiar prisms, create a spectrum by separating light into its individual wavelength components. Close examination of the amount of light at each wavelength reveals the presence of absorption and emission lines, which are the “fingerprints” of the chemical composition and physical and dynamical states of stars and gas. The astronomer has a wide choice of gratings according to her/his needs for wavelength coverage and spectral resolution.

A unique feature of STIS is that by having light enter a long, narrow slit before reaching the gratings, a separate spectrum can be recorded simultaneously along each of the 1024 “pixel rows” of the detector. By orienting the long slit, for example, across the nucleus of a galaxy, one can efficiently measure how fast the galaxy is rotating at different distances away from its center.

In many respects STIS complements the new Cosmic Origins Spectrograph (COS) to be mounted on Hubble during SM4. COS was designed with one primary purpose, to easily measure exceedingly faint levels of ultraviolet light emanating from very faint cosmic point sources, e.g. faint stars in our own galaxy and quasars far out across the universe. A repaired STIS will efficiently provide spatially resolved spectra of extended objects, spectra at visible and near-infrared wavelengths, very high (sharply defined) spectral resolution and measurements of the way some spectra vary with time – capabilities for which COS was not designed.


Scientific Future of STIS
Although it performed brilliantly for 7.5 years before suspending operations in 2004, the scientific potential of STIS is far from exhausted. Working side by side, the COS-STIS tandem will offer a full set of spectro-scopic tools for the astronomer. Each instrument partly backs up the other; each offers something the other doesn’t. Some glimpses into STIS’s scientific past offer a glimpse of future endeavors: