A New Kind of Equipment Carrier
Each time astronauts upgrade the Hubble Space Telescope, the new equipment rides to orbit on specialized pallets called carriers. The composite Super Lightweight Interchangeable Carrier (SLIC) is a new breed of equipment carrier that will allow the Space Shuttle to transport a full complement of scientific instruments and other components to Hubble.

Carriers transport Hubble’s new cargo in the Space Shuttle’s payload bay, protecting the cargo from the stress of launch and the trip to orbit. They also serve as temporary parking places for hardware during space-walks.

Once the mission is complete and the new hardware is installed on Hubble, carriers provide storage space and protection for the old equipment’s journey back to Earth. 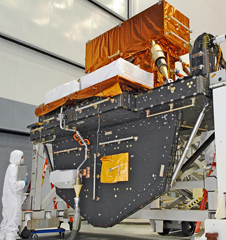 Image credit:   NASA These large carriers, which span the width of the shuttle’s payload bay, add thousands of pounds to the weight of the shuttle. Because the fully loaded shuttle cannot exceed a specified maximum weight limit, every pound trimmed from a carrier is one more pound that can be used for additional payload, e.g., science instruments or fuel for maneuvering or reboost.

Trimming Pounds, Gaining Strength
Anticipating that Servicing Mission 4 (SM4) will have to carry a full load of instruments and equipment to orbit, in addition to equipment that will be needed to inspect the shuttle’s Thermal Protection System (TPS), the Hubble Space Telescope team built SLIC using state-of-the-art, lightweight, composite materials and a more structurally efficient design. Engineers dramatically increased performance and load-carrying capability while significantly reducing weight. Compared to aluminum and titanium, which are metals typically used in spacecraft and launch vehicle design, the composites used to build SLIC have greater strength-to-mass ratios. SLIC features other attractive performance characteristics, such as fatigue resistance, which means it is less susceptible to wear and tear.

Made of carbon fiber with a cyanate ester resin and a titanium metal matrix composite, SLIC is the first all-composite carrier to fly on the shuttle. This flat, reusable pallet looks very different from the carriers flown on previous Hubble servicing missions because of its efficient design. This design, plus SLIC’s composite construction, makes it much lighter and stronger than traditional aluminum carriers. About half the weight of its predecessors, SLIC shows a dramatic increase in performance over other Hubble equipment carriers, with nearly double the carrying capability.

Weighing in at just 1750 lb, SLIC will carry Hubble’s newest camera, the 980 lb Wide Field Camera 3, which will ride to orbit in a 650-lb protective enclosure. SLIC also will carry two new batteries, each weighing 460 lb.

Benchmark for Technology
As the pathfinder for the use of composites in human spaceflight, SLIC has established the benchmark for technology required for future space missions, including analysis, testing, and verification.

Following in the footsteps of SLIC’s development, future human and robotic exploration missions will benefit from the use of composite materials. Engineers for programs such as the Orion Crew Exploration Vehicle are currently in discussions with Goddard engineers to learn how they succeeded with SLIC so they, too, can construct stronger, more efficient composites in decades to come.