Preparing for the Future
When the Hubble Space Telescope reaches the end of its life, NASA will need to de-orbit it safely using a next-generation space transportation vehicle. 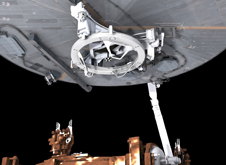 Shown here in the top center is the Soft Capture Mechanism–-the ring-like device that attaches to Hubble’s aft bulkhead.
Credit: NASA
> Larger Image
Originally planned for Earth return on the Shuttle, Hubble’s scientific life will now extend beyond the planned retirement date of the Shuttle in 2010. As part of Servicing Mission 4, engineers have developed the Soft Capture and Rendezvous System, or SCRS, which will enable the future rendezvous, capture, and safe disposal of Hubble by either a crewed or robotic mission. The SCRS greatly increases the current Shuttle capture interfaces on Hubble, therefore significantly reducing the rendezvous and capture design complexities associated with the disposal mission.

The SCRS is comprised of the Soft Capture Mechanism (SCM) system and the Relative Navigation System (RNS).

The Soft Capture Mechanism
The SCM will launch on a turn-table like piece of equipment called the Flight Support System (FSS) within the cargo bay of the Shuttle. The FSS serves as the berthing platform for Hubble and provides all electrical and mechanical interfaces between the Shuttle and the telescope while Hubble is docked.

The SCM uses a Low Impact Docking System (LIDS) interface and associated relative navigation targets for future rendezvous, capture, and docking operations. The system’s LIDS interface is designed to be compatible with the rendezvous and docking systems to be used on the next-generation space transportation vehicle.

During the mission, astronauts will attach the SCM to Hubble. About 72 inches in diameter and 2 feet high, the SCM will sit on the bottom of Hubble, inside the FSS berthing and positioning ring, without affecting the normal FSS-to-Hubble interfaces. It will be attached onto the telescope by three sets of jaws that clamp onto the existing berthing pins on Hubble’s aft bulkhead.

This simulation shows one of the RNS system’s cameras collecting data during Hubble’s deployment back into space after the mission is complete.
Credit: NASA
> Larger Image

The astronauts will drive a gearbox, and the jaws will release the SCM from the FSS and clamp onto Hubble’s berthing pins. It can be transferred to Hubble at any time during the mission.

The Relative Navigation System
The RNS is an imaging system consisting of optical and navigation sensors and supporting avionics. It will collect data on Hubble during capture and deployment.

The RNS system will acquire valuable information about Hubble by way of images and video of the telescope’s aft bulkhead as the Shuttle releases it back into space.This information will enable NASA to pursue numerous options for the safe de-orbit of Hubble.

The RNS system will be carried on the Multi-Use Lightweight Equipment (MULE) carrier aboard the Shuttle. This carrier will also store crew aids and tools for the astronauts’ spacewalks, a spare Rate Sensor Unit, and a contingency Electronic Control Unit.