During the Hubble Space Telescope Second Servicing Mission in 1997 and subsequent missions, astronauts observed damage to some of the Telescope’s thermal insulation. Years of exposure to the harsh environment of space had taken a toll on Hubble’s protective multilayer insulation, and some areas were torn or broken. This multi-layer insulation protects the observatory from the severe and rapid temperature changes it experiences as it moves through its 97-minute orbit from very hot sun to very cold night. 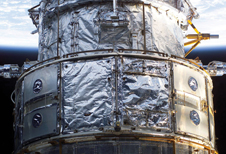 This photo shows from left to right, Bays 6, 7, 8, and 9 with New NOBLs on Bays 6 and 9. The damaged insulation on Bay 8 is scheduled to be replaced during SM4.
Credit: NASA
> Larger Image

Protecting and Maintaining Normal Operating Temperatures
The New Outer Blanket Layer, or NOBL, covers protect Hubble’s external blankets. They prevent further degradation of the insulation and maintain normal operating temperatures of Hubble’s electronic equipment. Each NOBL has been tested to ensure that it can withstand exposure to: charged particles, X-rays, ultraviolet radiation, and thermal cycling for at least ten years.

The covers are made of specially coated stainless steel foil which is trimmed to fit each particular equipment bay door that is covered. Each cover is supported by a steel picture-frame structure. Expanding plugs, like common kitchen bottle stoppers, fit into door vent holes to allow quick installation by the space-walking astronauts.