The Fine Guidance Sensor (FGS) that will be taken to orbit on SM4 is an optical sensor that will be used on the Hubble Space Telescope to provide pointing information for the spacecraft and also functions as a scientific instrument for astrometric science.

A FGS consists of a large structure housing a collection of mirrors, lenses, servos, prisms, beam splitters and photomultiplier tubes. 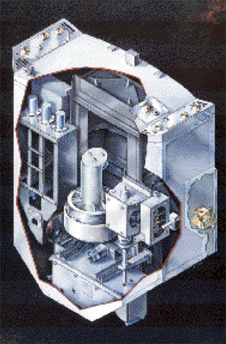 Credit: NASA
> Larger ImageThere are three fine guidance sensors on Hubble located at 90-degree intervals around the circumference of the telescope. Along with the gyroscopes, the FGSs are a key component of Hubble’s highly complex but extraordinarily effective “pointing control system.” In this role the FGSs’ job is to acquire and “lock” onto pre-chosen guide stars, feeding the position signals to the main Hubble computer where small but inevitable drifts in the gyro signals can be corrected. The end result is a rock-steady telescope which can take full advantage of its optics and instrumentation to perform world-class science on the full gamut of astronomical targets. Typically, two FGSs are used, each one locked onto one guide star.

There is more to the FGS story than “just” pointing control. The third FGS can be used as a scientific instrument for astrometry—the precise measurement of stellar positions and motions. The FGS chosen to be the “astrometer FGS” is the one which has the best performance. Currently, that role is filled by FGS1, and it will not be changed out during SM4. The new FGS will take the place of FGS2 and the likelihood is that the new FGS will become the astrometer.

Pointing Control—How Good?
Glad you asked. The pointing requirement for Hubble is that the stability of the telescope—the so-called “jitter”—be no worse than 0.007 arcsecond (arcsec for short) for 95% of the time. What is an “arcsec”? One arcsecond is the angle created by the diameter of a dime (3/4 inch) at a distance of approximately 2.5 miles (4 km). for example, the diameter of the Moon as seen from Earth is roughly 1800 arc seconds. After the FGSs lock onto guide stars, they can measure any apparent motion to an accuracy of 0.0028 arcsec. Combination of the FGS and gyro signals in the pointing control software give Hubble the ability to remain pointed at targets with no more than 0.007 arcsec of deviation over long periods of time. This level of stability and precision is comparable to being able to hold a laser beam focused on a dime that is 200 miles away (the distance from Washington D.C. to New York City).

Astrometry Science
Astrometry is the science that deals with the determination of precise positions and motions of stars. The FGSs can provide star positions that are about 10 times more precise than those observed from a ground based telescope.

When used for astrometric science the FGSs will let Hubble:

Servicing
The FGS that was returned on SM3A has been refurbished and upgraded for re-use on Hubble’s Servicing Mission 4. This refurbished unit has an enhanced on-orbit alignment capability over the original FGS design.

The astrometry science program is managed through the Space Telescope Science Institute, Baltimore, Md., and is open to scientists throughout the world in the same manner as all other Hubble science.