When astronauts return to the Hubble Space Telescope during Servicing Mission 4 (SM4), they will replace all six of the telescope’s 125-pound nickel hydrogen batteries. These batteries provide all the electrical power to support Hubble operations during the night portion of its orbit.

The telescope’s orbit is approximately 97 minutes long, about 61 minutes of which are in sunlight and 36 minutes are in the Earth’s shadow (night). During Hubble’s sunlight or daytime period, the solar arrays provide power to the onboard electrical equipment. They also charge the spacecraft’s batteries, so that the batteries can power the spacecraft during the night portion of Hubble’s orbit.

Battery Module Assembly with lid removed, showing the cells and power isolation switches.
Credit: NASA
> Larger Image
All six batteries are normally used at the same time. Like the ones they replace, the six new batteries reside in two modules, each containing three batteries. Each module weighs 460 pounds and measures 36 inches long, 32 inches wide, and 11 inches high. Astronauts will remove the old battery modules from equipment bays #2 and #3, and will install the new modules in the same locations.

Each of the 6 batteries begins its life on the ground with approximately 88 amp-hrs of capacity. Each battery contains 22 individual cells wired together in series. Due to limitations of Hubble’s thermal control system, the batteries can only be charged to 75 amp-hrs when installed on Hubble. The 6 new batteries will begin their life on-orbit by delivering a total of over 450 amp-hrs of capacity to Hubble.


Now more than 18 years into the mission, Hubble’s nickel hydrogen batteries have lasted more than 13 years longer than their design orbital life— longer than those in any other spacecraft located in low Earth orbit. This was possible partly because the batteries were built to very exacting standards using an extremely robust design. Nickel hydrogen battery chemistry is very stable and is known to exceed on-orbit performance requirements for long duration missions. 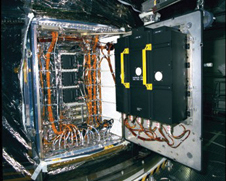 Another reason for the batteries’ longevity is that they are very carefully managed on a daily basis by Electrical Power System engineers at Goddard Space Flight Center (GSFC), which has resulted in improved long-term on-orbit performance. This is done by closely monitoring the amount of current that flows into the batteries and their temperature during each charging cycle. Due to aging and cycling, the batteries are showing a slow loss in capacity, a normal and expected trend. If not replaced, they will eventually be unable to support Hubble’s science mission.

The replacement batteries are superior to the old ones in several ways. The new batteries are made using a “wet slurry” process, in which powdered metallic materials mixed in a wet binder agent are poured into a mold and heated until the liquid boils off, leaving a porous solid. This process produces batteries which are physically stronger and better performing than the “dry sinter” batteries they are replacing. Metallic materials are mixed dry and pressed into a mold under high pressure in the “dry sinter” manufacturing process. Each new battery also has the added safety feature of a battery isolation switch that electrically dead-faces each connector. “Dead-face” means no electrical power is present at the connectors while the switch is in the “off” position. This creates a safer environment for astronauts installing the battery modules.