The Violent Lives of Galaxies: Caught in the Cosmic Dark Matter Web 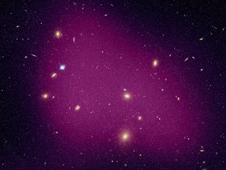 > Larger image Astronomers are using NASA’s Hubble Space Telescope to dissect one of the largest structures in the universe as part of a quest to understand the violent lives of galaxies. Hubble is providing indirect evidence of unseen dark matter tugging on galaxies in the crowded, rough-and-tumble environment of a massive supercluster of hundreds of galaxies.

Dark matter is an invisible form of matter that accounts for most of the universe’s mass. Hubble’s Advanced Camera for Surveys has mapped the invisible dark matter scaffolding of the supercluster Abell 901/902, as well as the detailed structure of individual galaxies embedded in it.