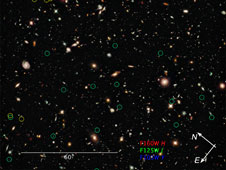 › Larger Image
This August 2009 view of the universe was taken by Hubble's new infrared camera combined with the deepest-ever optical image taken in 2004.
Credit: NASA, ESA, G. Illingworth (UCO/Lick Observatory and University of California, Santa Cruz), and the HUDF09 Team NASA's Hubble Space Telescope has broken the distance limit for galaxies and uncovered a primordial population of compact and ultra-blue galaxies that have never been seen before.

The deeper Hubble looks into space, the farther back in time it looks, because light takes billions of years to cross the observable universe. This makes Hubble a powerful "time machine" that allows astronomers to see galaxies as they were 13 billion years ago, just 600 million to 800 million years after the Big Bang.

The data from Hubble's new infrared camera, the Wide Field Camera 3 (WFC3), on the Ultra Deep Field (taken in August 2009) have been analyzed by no less than five international teams of astronomers. A total of 15 papers have been submitted to date by astronomers worldwide. Some of these early results are being presented by various team members on Jan. 6, 2010, at the 215th meeting of the American Astronomical Society in Washington, D.C.

"With the rejuvenated Hubble and its new instruments, we are now entering unchartered territory that is ripe for new discoveries," says Garth Illingworth of the University of California, Santa Cruz, leader of the survey team that was awarded the time to take the new WFC3 infrared data on the Hubble Ultra Deep Field (imaged in visible light by the Advanced Camera for Surveys in 2004). "The deepest-ever near-infrared view of the universe -- the HUDF09 image -- has now been combined with the deepest-ever optical image -- the original HUDF (taken in 2004) -- to push back the frontiers of the searches for the first galaxies and to explore their nature," Illingworth says.

Rychard Bouwens of the University of California, Santa Cruz, a member of Illingworth's team and leader of a paper on the striking properties of these galaxies, says that, "the faintest galaxies are now showing signs of linkage to their origins from the first stars. They are so blue that they must be extremely deficient in heavy elements, thus representing a population that has nearly primordial characteristics."

James Dunlop of the University of Edinburgh, agrees. "These galaxies could have roots stretching into an earlier population of stars. There must be a substantial component of galaxies beyond Hubble's detection limit."

Three teams worked hard to find these new galaxies and did so in a burst of papers immediately after the data were released in September, soon followed by a fourth team, and later a fifth team. The existence of these newly found galaxies pushes back the time when galaxies began to form to before 500-600 million years after the Big Bang. This is good news for astronomers building the much more powerful James Webb Space Telescope (planned for launch in 2014), which will allow astronomers to study the detailed nature of primordial galaxies and discover many more even farther away. There should be a lot for Webb to hunt for.

The deep observations also demonstrate the progressive buildup of galaxies and provide further support for the hierarchical model of galaxy assembly where small objects accrete mass, or merge, to form bigger objects over a smooth and steady but dramatic process of collision and agglomeration. It's like streams merging into tributaries and then into a bay.

These newly found objects are crucial to understanding the evolutionary link between the birth of the first stars, the formation of the first galaxies, and the sequence of evolutionary events that resulted in the assembly of our Milky Way and the other "mature" elliptical and majestic spiral galaxies in today's universe.

The HUDF09 team also combined the new Hubble data with observations from NASA's Spitzer Space Telescope to estimate the ages and masses of these primordial galaxies. "The masses are just 1 percent of those of the Milky Way," explains team member Ivo Labbe of the Carnegie Institute of Washington, leader of two papers on the data from the combined NASA Great Observatories. He further noted that "to our surprise, the results show that these galaxies at 700 million years after the Big Bang must have started forming stars hundreds of millions of years earlier, pushing back the time of the earliest star formation in the universe."

The results are gleaned from the HUDF09 observations, which are deep enough at near-infrared wavelengths to reveal galaxies at redshifts from z=7 to beyond redshift z=8. (The redshift value z is a measure of the stretching of the wavelength or "reddening" of starlight due to the expansion of space.) The clear detection of galaxies between z=7 and z=8.5 corresponds to "look-back times" of approximately 12.9 billion years to 13.1 billion years ago.

"This is about as far as we can go to do detailed science with the new HUDF09 image. This shows just how much the James Webb Space Telescope (JWST) is needed to unearth the secrets of the first galaxies," says Illingworth. The challenge is that spectroscopy is needed to provide definitive redshift values, but the objects are too faint for spectroscopic observations (until JWST is launched). Therefore, the redshifts are inferred by the galaxies' apparent colors through a now very well-established technique.

The teams are finding that the number of galaxies per unit of volume of space drops off smoothly with increasing distance, and the HUDF09 team has also found that the galaxies become surprisingly blue intrinsically. The ultra-blue galaxies are extreme examples of objects that appear so blue because they may be deficient in heavier elements, and as a result, quite free of the dust that reddens light through scattering.

A longstanding problem with these findings is that it still appears that these early galaxies did not put out enough radiation to "reionize" the early universe by stripping electrons off the neutral hydrogen that cooled after the Big Bang. This "reionization" event occurred between about 400 million and 900 million years after the Big Bang, but astronomers still don't know which sources of light caused it to happen. These new galaxies are being seen right in this important epoch in the evolution of the universe.

Perhaps the density of very faint galaxies below the current detection limit is so high that there may be enough of them to support reionization. Or there was an earlier wave of galaxy formation that decayed and then was "rebooted" by a second wave of galaxy formation. Or, possibly the early galaxies were extraordinarily efficient at reionizing the universe.

Due to these uncertainties it is not clear what type of object or evolutionary process did the "heavy lifting" by ionizing the young universe. The calculations remain rather uncertain, and so galaxies may do more than currently expected, or astronomers may need to invoke other phenomena such as mini-quasars (active supermassive black holes in the cores of galaxies) -- current estimates suggest however that quasars are even less likely than galaxies to be the cause of reionization. This is an enigma that still challenges astronomers and the very best telescopes.

"As we look back into the epoch of the first galaxies in the universe, from a redshift of 6 to a redshift of 8 and possibly beyond, these new observations indicate that we are likely seeing the end of reionization, and perhaps even into the reionization era, which is the last major phase transition of the gas in the universe," says Rogier Windhorst of Arizona State University, leader of one of the other teams that analyzed the WFC3 data. "Though the exact interpretation of these new results remains under debate, these new WFC3 data may provide an exciting new view of how galaxy formation proceeded during and at the end of the reionization era."

Hubble's WFC3/IR camera was able to make deep exposures to uncover new galaxies at roughly 40 times greater efficiency than its earlier infrared camera that was installed in 1997. The WFC3/IR brought new infrared technology to Hubble and accomplished in four days of observing what would have previously taken almost half a year for Hubble to do.


For images and more information, visit:


The Hubble Space Telescope is a project of international cooperation between NASA and the European Space Agency. NASA's Goddard Space Flight Center manages the telescope. The Space Telescope Science Institute conducts Hubble science operations. The institute is operated for NASA by the Association of Universities for Research in Astronomy, Inc. in Washington.