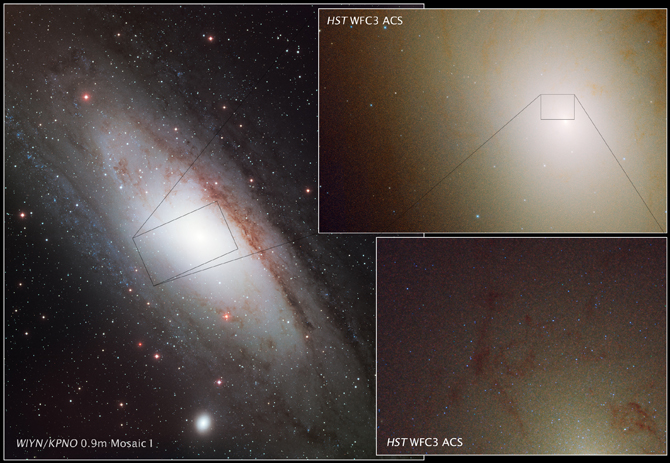 The image at left shows the nearby, majestic Andromeda galaxy. The rectangular box marks the region probed by NASA’s Hubble Space Telescope (a blend of visible and ultraviolet light). The photo (top right) is 7,900 light-years across and reveals the galaxy's crowded central region. The bright area near the center of the image is a grouping of stars nestled around the galaxy's black hole. The blue dots sprinkled throughout the image are ultra-blue stars whose population increases around the crowded hub. The square box shows a close-up view of an area around the core. The detailed image, shown at bottom right, reveals a richer population of blue stars huddled around the core. Dark dust clouds also are visible. The right-hand images, taken with Hubble, are part of a census of stars in M31 called the Panchromatic Hubble Andromeda Treasury survey. (Credit: NASA; ESA; B. Williams and J. Dalcanton, University of Washington, Seattle)
› Larger image

Blue is typically an indicator of hot, young stars. In this case, however, the stellar oddities are aging, sun-like stars that have prematurely cast off their outer layers of material, exposing their extremely blue-hot cores.

Astronomers were surprised when they spotted these stars because physical models show that only an unusual type of old star can be as hot and as bright in ultraviolet light.

While Hubble has spied these ultra-blue stars before in Andromeda, the new observation covers a much broader area, revealing that these stellar misfits are scattered throughout the galaxy's bustling center. Astronomers used Hubble's Wide Field Camera 3 to find roughly 8,000 of the ultra-blue stars in a stellar census made in ultraviolet light, which traces the glow of the hottest stars. The study is part of the multi-year Panchromatic Hubble Andromeda Treasury survey to map stellar populations across the galaxy.

"We were not looking for these stars. They stood out because they were bright in ultraviolet light and very different from the stars we expected to see," said Julianne Dalcanton of the University of Washington in Seattle, leader of the Hubble survey.

The team's results are being presented today at the American Astronomical Society meeting in Austin, Texas. A paper describing the finding will be published in The Astrophysical Journal.

The telescope spied the stars within 2,600 light-years of the core. After analyzing the stars for nearly a year, Dalcanton's team determined that they were well past their prime. "The stars are dimmer and have a range of surface temperatures different from the extremely bright stars we see in the star-forming regions of Andromeda," said Phil Rosenfield of the University of Washington, the paper's lead author.

"We caught these stars when they're the brightest, just before they become white dwarfs," said team member Leo Girardi of the National Institute for Astrophysics's Astronomical Observatory of Padua. "It is likely that there are many other similarly hot stars in this central part of Andromeda at earlier stages of their lives. But such stars are too dim for Hubble to see because they're mixed in with a crowd of normal stars."

The astronomers have proposed two possible scenarios to explain why these blue stars evolve differently. According to Rosenfield, the most likely scenario is that the stars are rich in chemical elements other than hydrogen and helium. Observations with ground-based telescopes have shown the stars in the galaxy's hub have an abundant supply of "heavy elements," which makes it easier for stars to eject lots of material into space late in life.

In this scenario radiation from the star is more efficient at pushing on gas laced with heavy elements, which drives away the material, like wind moving a thick sail. Although all the stars in the core are enriched in heavy elements, the bright blue stars may contain especially high amounts, which help trigger the mass loss.

The study also shows that the number of blue stars decreases with distance from the core, tracing the drop in the amount of heavy elements.

Another possible explanation is that the blue stars are in close binary systems and have lost mass to their partners. This mass loss would expose the stars' hot cores. The astronomers were surprised to find that the ultra-blue stars are distributed in the galaxy in the same way as a population of binary stars with similar masses that were found in X-ray observations by NASA's Chandra X-ray Observatory.

The astronomers' next step is to create simulations of these stars to try to determine which scenario is the one that leads them on a different evolutionary path.

For images and more information about this study, visit: