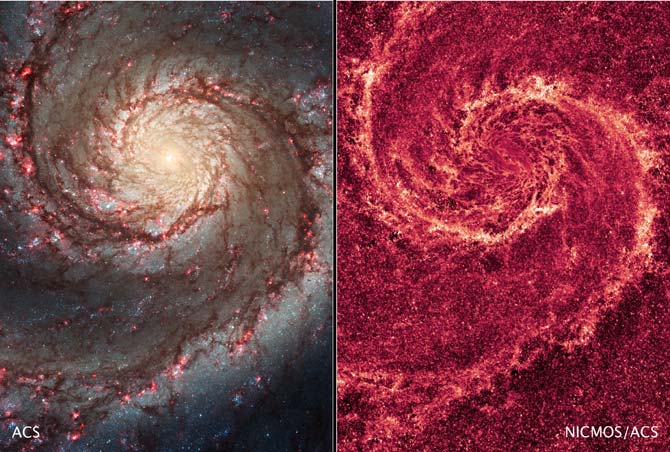 The image at left, taken in visible light, highlights the attributes of a typical spiral galaxy, including graceful, curving arms, pink star-forming regions, and brilliant blue strands of star clusters.

In the image at right, most of the starlight has been removed, revealing the Whirlpool's skeletal dust structure, as seen in near-infrared light. This new image is the sharpest view of the dense dust in M51. The narrow lanes of dust revealed by Hubble reflect the galaxy's moniker, the Whirlpool Galaxy, as if they were swirling toward the galaxy's core.

The red color in the near-infrared image traces the dust, which is punctuated by hundreds of tiny clumps of stars, each about 65 light-years wide. These stars have never been seen before. The star clusters cannot be seen in visible light because dense dust enshrouds them. The image reveals details as small as 35 light-years across.

Astronomers expected to see large dust clouds, ranging from about 100 light-years to more than 300 light-years wide. Instead, most of the dust is tied up in smooth and diffuse dust lanes. An encounter with another galaxy may have prevented giant clouds from forming.

Probing a galaxy's dust structure serves as an important diagnostic tool for astronomers, providing invaluable information on how the gas and dust collapse to form stars. Although Hubble is providing incisive views of the internal structure of galaxies such as M51, the planned James Webb Space Telescope (JWST) is expected to produce even crisper images.

Researchers constructed the image by combining visible-light exposures from Jan. 18 to 22, 2005, with the Advanced Camera for Surveys (ACS), and near-infrared light pictures taken in December 2005 with the Near Infrared Camera and Multi-Object Spectrometer (NICMOS).

Credit for the NICMOS image: NASA, ESA, M. Regan and B. Whitmore (STScI), and R. Chandar (University of Toledo)

Image files and more information about M51 are available on: