Grow Text SizeShrink Text Size
Space Telescopes Reveal Secrets of Turbulent Black Hole
A fleet of spacecraft including NASA's Hubble Space Telescope has uncovered unprecedented details in the surroundings of a supermassive black hole. Observations reveal huge bullets of gas being driven away from the gravitational monster and a corona of very hot gas hovering above the disk of matter that is falling into the black hole. 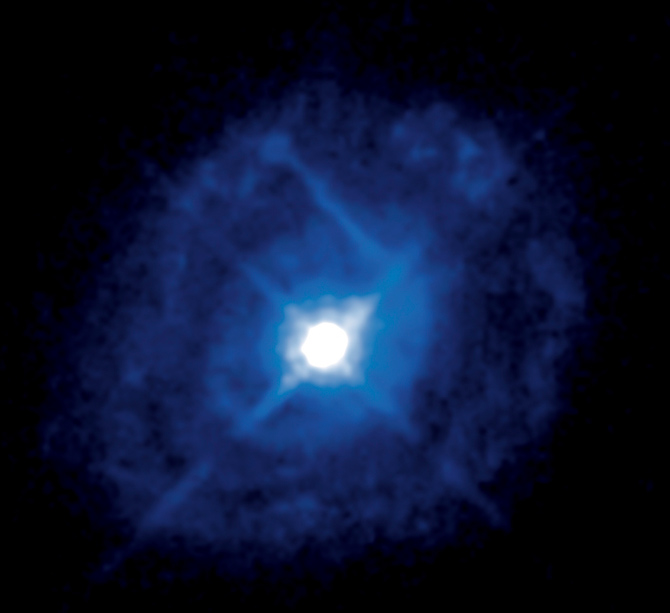 A team led by Jelle Kaastra of SRON Netherlands Institute for Space Research made use of data from ESA's XMM-Newton and INTEGRAL spacecraft (which study X-rays and gamma rays, respectively), the Hubble Space Telescope (for ultraviolet observations with the COS instrument), and NASA's Chandra (X-ray) Observatory and Swift (gamma-ray) satellites.

The black hole that the team chose to study lies at the heart of the galaxy Markarian 509 (Mrk 509), nearly 500 million light-years away. This black hole is colossal, containing 300 million times the mass of the Sun, and is growing more massive every day as it continues to feed on surrounding matter, which glows brightly as it forms a rotating disk around the black hole. Mrk 509 was chosen because it is known to vary in brightness, which indicates that the flow of matter is turbulent.

The above image of Mrk 509 was taken in April 2007 with Hubble's Wide Field Planetary Camera 2. But using a large number of telescopes that are sensitive to different wavelengths of light gave astronomers unprecedented coverage running from the infrared, through the visible, ultraviolet, X-rays, and into the gamma-ray band. 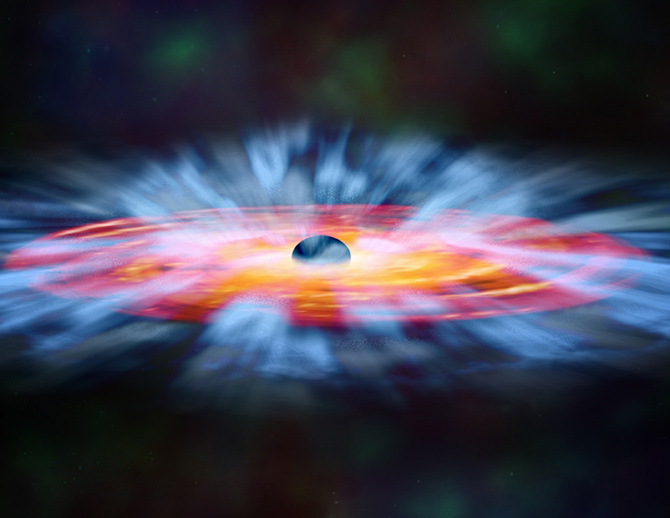 In this artist's illustration, turbulent winds of gas swirl around a black hole. Some of the gas is spiraling inward toward the black hole, but another part is blown away. Artwork Credit: NASA, and M. Weiss (Chandra X -ray Center)
› View larger

The study is presented in a series of seven papers in the journal Astronomy and Astrophysics, with more expected to be published in coming months.

A full account of the research can be read on the SRON website at http://www.sron.nl.
› Back To Top