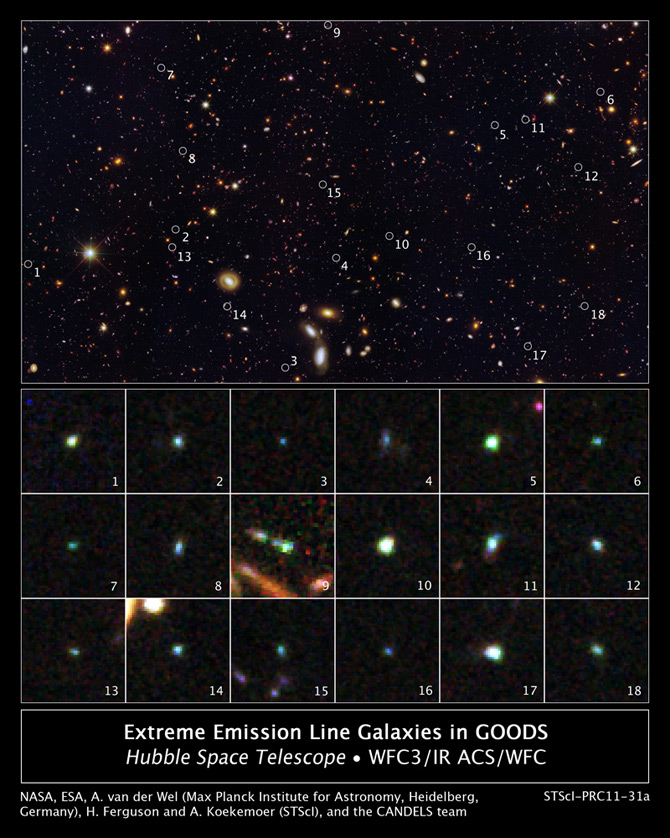 This image reveals 18 tiny galaxies uncovered by NASA's Hubble Space Telescope. The puny galaxies, shown in the postage stamp-sized images, existed 9 billion years ago and are brimming with star birth. Hubble's Wide Field Camera 3 and Advanced Camera for Surveys spied the galaxies in a field called the Great Observatories Origins Deep Survey (GOODS). The galaxies are among 69 dwarf galaxies found in the GOODS (marked by green circles in the large image) and other fields. Images of the individual galaxies were taken November 2010 to January 2011. The large image was taken between Sept. 2002 and Dec. 2004, and between Sept. 2009 and Oct. 2009. (Credit: NASA, ESA, A. van der Wel (Max Planck Institute for Astronomy, Heidelberg, Germany), H. Ferguson and A. Koekemoer (STScI.), and the CANDELS team)

Using its near-infrared vision to peer 9 billion years back in time, NASA's Hubble Space Telescope has uncovered an extraordinary population of young dwarf galaxies brimming with star formation. While dwarf galaxies are the most common type of galaxy in the universe, the rapid star-birth observed in these newly found examples may force astronomers to reassess their understanding of the ways in which galaxies form.

The galaxies are a hundred times less massive, on average, than the Milky Way, yet churn out stars at such a furious pace that their stellar content would double in just 10 million years. By comparison, the Milky Way would take a thousand times longer to double its star population.

The universe is estimated to be 13.7 billion years old, and these newly discovered galaxies are extreme even for the young universe -- when most galaxies were forming stars at higher rates than they are today. Astronomers using Hubble's instruments could spot the galaxies because the radiation from young, hot stars has caused the oxygen in the gas surrounding them to light up like a bright neon sign.

"The galaxies have been there all along, but up until recently astronomers have been able only to survey tiny patches of sky at the sensitivities necessary to detect them," said Arjen van der Wel of the Max Planck Institute for Astronomy in Heidelberg, Germany, lead author of a paper on the results being published online on Nov. 14 in The Astrophysical Journal. "We weren't looking specifically for these galaxies, but they stood out because of their unusual colors."

The observations were part of the Cosmic Assembly Near-infrared Deep Extragalactic Legacy Survey (CANDELS), an ambitious three-year study to analyze the most distant galaxies in the universe. CANDELS is the first census of dwarf galaxies at such an early epoch.


"In addition to the images, Hubble has captured spectra that show us the oxygen in a handful of galaxies and confirmed their extreme star-forming nature," said co-author Amber Straughn at NASA's Goddard Space Flight Center in Greenbelt, Md. "Spectra are like fingerprints. They tell us the galaxies' chemical composition."

The resulting observations are somewhat at odds with recent detailed studies of the dwarf galaxies that are orbiting as satellites of the Milky Way.

"Those studies suggest that star formation was a relatively slow process, stretching out over billions of years," explained Harry Ferguson of the Space Telescope Science Institute (STScI) in Baltimore, Md., co-leader of the CANDELS survey. "The CANDELS finding that there were galaxies of roughly the same size forming stars at very rapid rates at early times is forcing us to re-examine what we thought we knew about dwarf galaxy evolution."

The observations suggest that the newly discovered galaxies were very common 9 billion years ago. However, it is a mystery why the newly found dwarf galaxies were making batches of stars at such a high rate. Computer simulations show star formation in small galaxies may be episodic. Gas cools and collapses to form stars. The stars then reheat the gas and blow it away, as in supernova explosions. After some time, the gas cools and collapses again, producing a new burst of star formation, continuing the cycle.

"While these theoretical predictions may provide hints to explain the star formation in these newly discovered galaxies, the observed bursts are much more intense than what the simulations can reproduce," van der Wel said.

The James Webb Space Telescope, an infrared observatory scheduled to launch later this decade, will be able to probe these faint galaxies at an even earlier era to see the glow of their stars, reveal their chemical composition, and offer better details on their formation.

The Hubble Space Telescope is a project of international cooperation between NASA and the European Space Agency. Goddard manages the telescope. STScI conducts Hubble science operations and is operated for NASA by the Association of Universities for Research in Astronomy Inc. in Washington.

Additional images
› Back To Top