Grow Text SizeShrink Text Size
Hubble Maps 3-D Structure of Ejected Material Around Erupting Star
A flash of light from a stellar outburst has provided a rare look at the 3-D structure of material ejected by an erupting nova.

Astronomers used NASA's Hubble Space Telescope to observe the light emitted by the close double-star system T Pyxidis, or T Pyx, a recurring nova, during its latest outburst in April 2011. 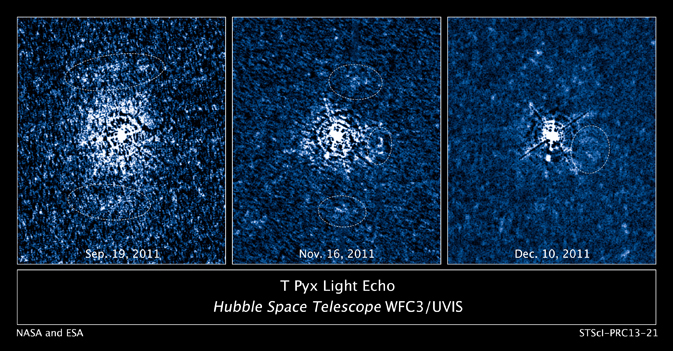 Hubble's Wide Field Camera 3 imaged the double-star system T Pyxidis, or T Pyx, over a four-month period. T Pyx is a recurrent nova, erupting every 12 to 50 years. T Pyx's latest outburst was in April 2011. The star is the white blob in the middle of each image.
Credit: NASA, ESA, A. Crotts, J. Sokoloski, and H. Uthas (Columbia University), and S. Lawrence (Hofstra University)
› Larger image
A nova erupts when a white dwarf, the burned-out core of a sun-like star, has siphoned off enough hydrogen from a companion star to trigger a thermonuclear runaway. As hydrogen builds up on the surface of the white dwarf, it becomes hotter and denser until it detonates like a colossal hydrogen bomb, leading to a 10,000-fold increase in brightness in a little more than one day. Nova explosions are extremely powerful, equal to a blast of one million billion tons of dynamite. T Pyx erupts every 12 to 50 years.

Contrary to some predictions, the astronomers were surprised to find the ejecta from earlier outbursts stayed in the vicinity of the star and formed a disk of debris around the nova. The discovery suggests material continues expanding outward along the system's orbital plane, but it does not escape the system.

"We fully expected this to be a spherical shell," says Arlin Crotts of Columbia University, a member of the research team. "This observation shows it is a disk, and it is populated with fast-moving ejecta from previous outbursts."

Team member Stephen Lawrence of Hofstra University in Hempstead, N.Y., will present the results Tuesday at the American Astronomical Society meeting in Indianapolis.

Team member Jennifer Sokoloski, also of Columbia University and co-investigator on the project, suggests these data indicate the companion star plays an important role in shaping how material is ejected, presumably along the system's orbital plane, creating the pancake-shaped disk. The disk is tilted about 30 degrees from face-on toward Earth.

Using Hubble's Wide Field Camera 3, the team took advantage of the blast of light emitted by the erupting nova to trace the light's path as it lit up the disk and material from previous ejecta. The disk is so vast, about a light-year across, that the nova's light cannot illuminate all of the material at once. Instead, the light sweeps across the material, sequentially illuminating parts of the disk, a phenomenon called a light echo. The light reveals which parts of the disk are nearer to Earth and which sections are farther away. By tracing the light, the team assembled a 3-D map of the structure around the nova.

"We've all seen how light from fireworks shells during the grand finale will light up the smoke and soot from shells earlier in the show," Lawrence said. "In an analogous way, we're using light from T Pyx's latest outburst and its propagation at the speed of light to dissect its fireworks displays from decades past."

Although astronomers have witnessed light propagating through material surrounding other novae, this is the first time the immediate environment around an erupting star has been studied in three dimensions.

Astronomers have studied light echoes from other novae, but those phenomena illuminated interstellar material around the stars instead of material ejected from them.

The team also used the light echo to refine estimates of the nova's distance from Earth. The new distance is 15,600 light-years from Earth. Previous estimates were between 6,500 and 16,000 light-years. T Pyx is located in the southern constellation Pyxis, or the Mariner's Compass.

Astronomers call erupting stars novae, Latin for "new," because they abruptly appear in the sky. A nova quickly begins to fade in several days or weeks as the hydrogen is exhausted and blown into space.

The team also includes Helena Uthas of Columbia University. The team's results will appear online June 5 and will be published in the June 20, 2013, issue of the Astrophysical Journal Letters. Sokoloski is the paper's lead author.

For images, and more information about T Pyxidis, visit: