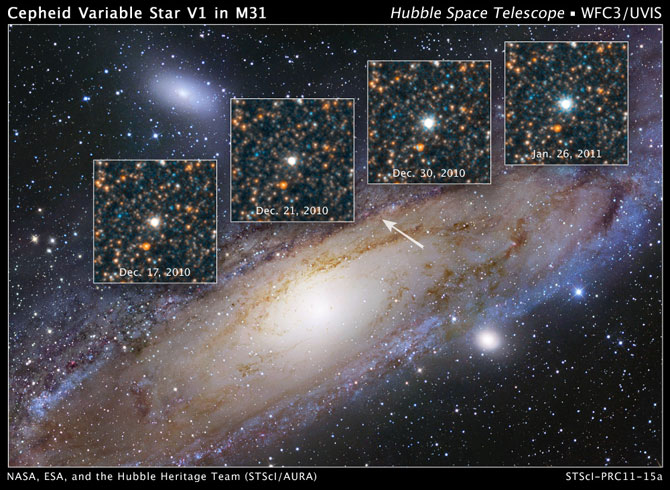 › View larger
NASA's Hubble Space Telescope has been trained on a single variable star that in 1923 altered the course of modern astronomy. V1 is a special class of pulsating star called a Cepheid variable that can be used to make reliable measurements of large cosmic distances. Credit: NASA, ESA, and the Hubble Heritage Team (STScI/AURA)

Though the universe is filled with billions upon billions of stars, the discovery of a single variable star in 1923 altered the course of modern astronomy. And, at least one famous astronomer of the time lamented that the discovery had shattered his world view.

The star goes by the inauspicious name of Hubble variable number one, or V1, and resides in the outer regions of the neighboring Andromeda galaxy, or M31. But in the early 1900s, most astronomers considered the Milky Way a single "island universe" of stars, with nothing observable beyond its boundaries. Andromeda was cataloged as just one of many faint, fuzzy patches of light astronomers called "spiral nebulae."

Were these spiral nebulae part of the Milky Way or were they independent island universes lying outside our galaxy? Astronomers didn't know for sure, until Edwin Hubble found a star in Andromeda that brightened and faded in a predictable pattern, like a lighthouse beacon, and identified it as V1, a Cepheid variable. This special type of star had already been proven to be a reliable distance marker within our galaxy.

The star helped Hubble show that Andromeda was beyond our galaxy and settled the debate over the status of the spiral nebulae. The universe became a much bigger place after Hubble's discovery, much to the dismay of astronomer Harlow Shapley, who believed the fuzzy nebulae were part of our Milky Way.

Nearly 90 years later, V1 is in the spotlight again. Astronomers pointed Edwin Hubble's namesake, NASA's Hubble Space Telescope, at the star once again, in a symbolic tribute to the legendary astronomer's milestone observation.

Astronomers with the Space Telescope Science Institute's Hubble Heritage Project partnered with the American Association of Variable Star Observers (AAVSO) to study the star. AAVSO observers followed V1 for six months, producing a plot, or light curve, of the rhythmic rise and fall of the star's light. Based on this light curve, the Hubble Heritage team scheduled telescope time to capture images of the star.

"V1 is the most important star in the history of cosmology," says astronomer Dave Soderblom of the Space Telescope Science Institute (STScI) in Baltimore, Md., who proposed the V1 observations.

"It's a landmark discovery that proved the universe is bigger and chock full of galaxies. I thought it would be nice for the Hubble telescope to look at this special star discovered by Hubble, the man."

But Hubble Heritage team member Max Mutchler of the STScI says that this observation is more than just a ceremonial nod to a famous astronomer.

"This observation is a reminder that Cepheids are still relevant today," he explains. "Astronomers are using them to measure distances to galaxies much farther away than Andromeda. They are the first rung on the cosmic distance ladder."

The Hubble and AAVSO observations of V1 will be presented at a press conference May 23 at the American Astronomical Society meeting in Boston, Mass.

Ten amateur astronomers from around the world, along with AAVSO Director Arne Henden, made 214 observations of V1 between July 2010 and December 2010. They obtained four pulsation cycles, each of which lasts more than 31 days. The AAVSO study allowed the Hubble Heritage team to target Hubble observations that would capture the star at its brightest and dimmest phases.

The observations were still tricky, though. "The star's brightness has a gradual decline followed by a sharp spike upward, so if you're off by a day or two, you could miss it," Mutchler explains.

Using the Wide Field Camera 3, the team made four observations in December 2010 and January 2011.

"The Hubble telescope sees many more and much fainter stars in the field than Edwin Hubble saw, and many of them are some type of variable star," Mutchler says. "Their blinking makes the galaxy seem alive. The stars look like grains of sand, and many of them have never been seen before."

For Soderblom, the Hubble observations culminated more than 25 years of promoting the star. Shortly after Soderblom arrived at the Institute in 1984, he thought it would be fitting to place a memento of Edwin Hubble's aboard the space shuttle Discovery, which would carry the Hubble Space Telescope into space.

"At first, I thought the obvious artifact would be his pipe, but [cosmologist] Allan Sandage [Edwin Hubble's protege] suggested another idea: the photographic glass plate of V1 that Hubble made in 1923," Soderblom recalls.

He made 15 film copies of the original 4-inch-by-5-inch glass plate. Ten of them flew onboard space shuttle Discovery in 1990 on the Hubble deployment mission. Fittingly, two of the remaining five film copies were part of space shuttle Atlantis's cargo in 2009 for NASA's fifth servicing mission to Hubble. One of those copies was carried aboard by astronaut and astronomer John Grunsfeld, now the STScI's deputy director.

Prior to the discovery of V1 many astronomers thought spiral nebulae, such as Andromeda, were part of our Milky Way galaxy. Others weren't so sure. In fact, astronomers Shapley and Heber Curtis held a public debate in 1920 over the nature of these nebulae. During the debate, Shapley championed his measurement of 300,000 light-years for the size of the Milky Way. Though Shapley overestimated its size, he was correct in asserting that the Milky Way was much larger than the commonly accepted dimensions. He also argued that spiral nebulae were much smaller than the giant Milky Way and therefore must be part of our galaxy. But Curtis disagreed. He thought the Milky Way was smaller than Shapley claimed, leaving room for other island universes beyond our galaxy.

To settle the debate, astronomers had to establish reliable distances to the spiral nebulae. So they searched for stars in the nebulae whose intrinsic brightness they thought they understood. Knowing a star's true brightness allowed astronomers to calculate how far away it was from Earth. But some of the stars they selected were not dependable milepost markers.

For example, Andromeda, the largest of the spiral nebulae, presented ambiguous clues to its distance. Astronomers had observed different types of exploding stars in the nebula. But they didn't fully understand the underlying stellar processes, so they had difficulty using those stars to calculate how far they were from Earth. Distance estimates to Andromeda, therefore, varied from nearby to far away. Which distance was correct? Edwin Hubble was determined to find out.

The astronomer spent several months in 1923 scanning Andromeda with the 100-inch Hooker telescope, the most powerful telescope of that era, at Mount Wilson Observatory in California. Even with the sharp-eyed telescope, Andromeda was a monstrous target, about 5 feet long at the telescope's focal plane. He therefore took many exposures covering dozens of photographic glass plates to capture the whole nebula.

He concentrated on three regions. One of them was deep inside a spiral arm. On the night of Oct. 5, 1923, Hubble began an observing run that lasted until the early hours of Oct. 6. Under poor viewing conditions, the astronomer made a 45-minute exposure that yielded three suspected novae, a class of exploding star. He wrote the letter "N," for nova, next to each of the three objects.

Later, however, Hubble made a startling discovery when he compared the Oct. 5-6 plate with previous exposures of the novae. One of the so-called novae dimmed and brightened over a much shorter time period than seen in a typical nova.

Hubble obtained enough observations of V1 to plot its light curve, determining a period of 31.4 days, indicating the object was a Cepheid variable. The period yielded the star's intrinsic brightness, which Hubble then used to calculate its distance. The star turned out to be 1 million light-years from Earth, more than three times Shapley's calculated diameter of the Milky Way.

Taking out his marking pen, Hubble crossed out the "N" next to the newfound Cepheid variable and wrote "VAR," for variable, followed by an exclamation point.

For several months the astronomer continued gazing at Andromeda, finding another Cepheid variable and several more novae. Then Hubble sent a letter along with a light curve of V1 to Shapley telling him of his discovery. After reading the letter, Shapley was convinced the evidence was genuine. He reportedly told a colleague, "Here is the letter that destroyed my universe."

By the end of 1924 Hubble had found 36 variable stars in Andromeda, 12 of which were Cepheids. Using all the Cepheids, he obtained a distance of 900,000 light-years. Improved measurements now place Andromeda at 2 million light-years away.

"Hubble eliminated any doubt that Andromeda was extragalactic," says Owen Gingerich, professor emeritus of Astronomy and of the History of Science at Harvard-Smithsonian Center for Astrophysics in Cambridge, Mass. "Basically, astronomers didn't know the distance to novae, so they had to make a rough estimate as to where they were and therefore what their absolute luminosity was. But that is on very treacherous ground. When you get a Cepheid that's been reasonably calculated, the period will tell you where it sits on the luminosity curve, and from that you can calculate a distance."

Shapley and astronomer Henry Norris Russell urged Hubble to write a paper for a joint meeting of the American Astronomical Society and American Association for the Advancement of Science at the end of December 1924. Hubble's paper, entitled "Extragalactic Nature of Spiral Nebulae," was delivered in absentia and shared the prize for the best paper. A short article about the award appeared in the Feb. 10, 1925, issue of The New York Times. Gingerich says Hubble's discovery was not big news at the meeting because the astronomer had informed the leading astronomers of his result months earlier.

Edwin Hubble's observations of V1 became the critical first step in uncovering a larger, grander universe. He went on to find many galaxies beyond the Milky Way. Those galaxies, in turn, allowed him to determine that the universe is expanding.

Could Hubble ever have imagined that nearly 100 years later, technological advances would allow amateur astronomers to perform similar observations of V1 with small telescopes in their backyards? Or, could Hubble ever have dreamed that a space-based telescope that bears his name would continue his quest to precisely measure the universe's expansion rate?

For images and more information, visit:


The Hubble Space Telescope is a project of international cooperation between NASA and the European Space Agency. NASA's Goddard Space Flight Center manages the telescope. The Space Telescope Science Institute (STScI) conducts Hubble science operations. STScI is operated for NASA by the Association of Universities for Research in Astronomy, Inc., in Washington, D.C.