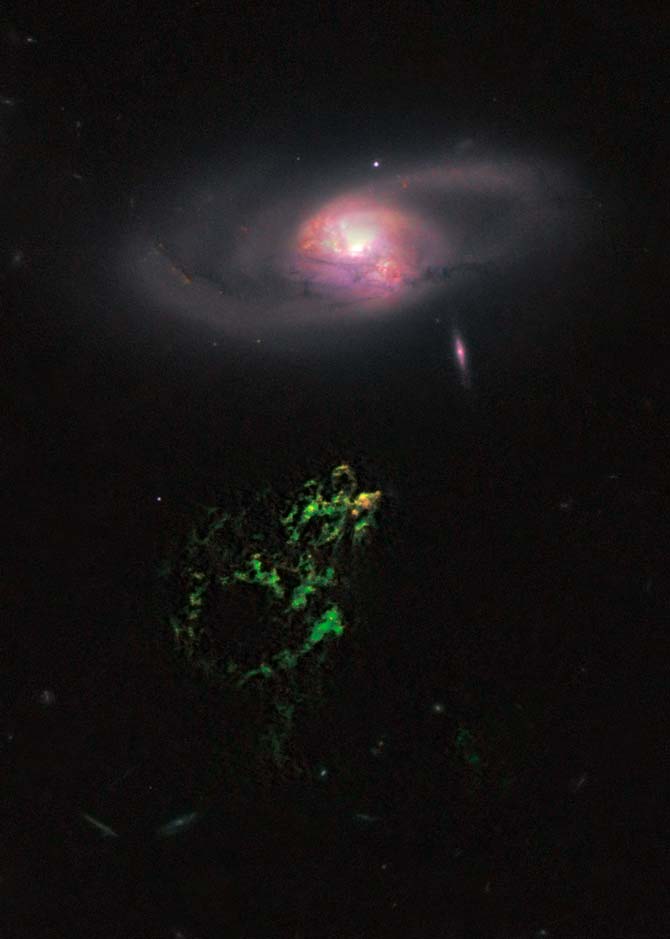 The bizarre object, dubbed Hanny's Voorwerp (Hanny's Object in Dutch), is the only visible part of a 300,000-light-year-long streamer of gas stretching around the galaxy, called IC 2947. The greenish Voorwerp is visible because a searchlight beam of light from the galaxy's core illuminated it. This beam came from a quasar, a bright, energetic object that is powered by a black hole. The quasar may have turned off about 200,000 years ago.

This Hubble view uncovers a pocket of star clusters, the yellowish-orange area at the tip of Hanny's Voorwerp. The star clusters are confined to an area that is a few thousand light- years wide. The youngest stars are a couple of million years old. The Voorwerp is the size of our Milky Way galaxy, and its bright green color is from glowing oxygen.

Hubble also shows that gas flowing from IC 2947 may have instigated the star birth by compressing the gas in Hanny's Voorwerp. The galaxy is located about 650 million light-years from Earth.

What appears to be a gaping hole in Hanny's Voorwerp actually may be a shadow cast by an object in the quasar's light path. The feature gives the illusion of a hole about 20,000 light-years wide. Hubble reveals sharp edges but no other changes in the gas around the apparent opening, suggesting that an object close to the quasar may have blocked some of the light and projected a shadow on the Voorwerp. This phenomenon is similar to a fly on a movie projector lens casting a shadow on a movie screen.

An interaction between IC 2947 and another galaxy about a billion years ago may have created Hanny's Voorwerp and fueled the quasar. The Hubble image shows that IC 2947 has been disturbed, with complex dust patches, warped spiral arms, and regions of star formation around its core. These features suggest the aftermath of a galaxy merger. The bright spots in the central part of the galaxy are star-forming regions. The small, pinkish object to the lower right of IC 2397 is an edge-on spiral galaxy in the background.

For images and more information about Hanny's Voorwerp, visit: