This ongoing recycling keeps some galaxies from emptying their "fuel tanks" and stretches their star-forming epoch to over 10 billion years.

Distant quasars shine through the gas-rich "fog" of hot plasma encircling galaxies. At ultraviolet wavelengths, Hubble's Cosmic Origins Spectrograph (COS) is sensitive to absorption from many ionized heavy elements, such as nitrogen, oxygen, and neon. COS's high sensitivity allows many galaxies that happen to lie in front of the much more distant quasars. The ionized heavy elements serve as proxies for estimating how much mass is in a galaxy's halo. (Credit: NASA; ESA; A. Feild, STScI)
› Larger image

This conclusion is based on a series of Hubble Space Telescope observations that flexed the special capabilities of its Cosmic Origins Spectrograph (COS) to detect gas in the halo of our Milky Way and more than 40 other galaxies. Data from large ground-based telescopes in Hawaii, Arizona and Chile also contributed to the studies by measuring the properties of the galaxies.

Astronomers believe that the color and shape of a galaxy is largely controlled by gas flowing through an extended halo around it. The three studies investigated different aspects of the gas-recycling phenomenon.

The results are being published in three papers in the November 18 issue of Science magazine. The leaders of the three studies are Nicolas Lehner of the University of Notre Dame in South Bend, Ind.; Jason Tumlinson of the Space Telescope Science Institute in Baltimore, Md.; and Todd Tripp of the University of Massachusetts at Amherst.

The COS observations of distant stars demonstrate that a large mass of clouds is falling through the giant halo of our Milky Way, fueling its ongoing star formation. These clouds of hot hydrogen reside within 20,000 light-years of the Milky Way disk and contain enough material to make 100 million suns. Some of this gas is recycled material that is continually being replenished by star formation and the explosive energy of novae and supernovae, which kicks chemically enriched gas back into the halo.

The COS observations also show halos of hot gas surrounding vigorous star-forming galaxies. These halos, rich in heavy elements, extend as much as 450,000 light-years beyond the visible portions of their galactic disks. The amount of heavy-element mass discovered far outside a galaxy came as a surprise. COS measured 10 million solar masses of oxygen in a galaxy's halo, which corresponds to about one billion solar masses of gas -- as much as in the entire space between stars in a galaxy’s disk.

Researchers also found that this gas is nearly absent from galaxies that have stopped forming stars. In these galaxies, the “recycling” process ignites a rapid firestorm of star birth which can blow away the remaining fuel, essentially turning off further star-birth activity.

This is evidence that gas pushed out of a galaxy, rather than pulled in from intergalactic space, determine a galaxy's fate." 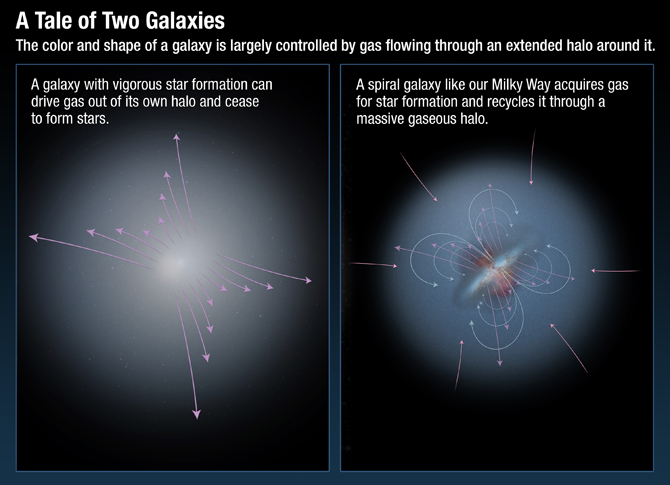 The color and shape of a galaxy is largely controlled by gas flowing through an extended halo around it. All modern simulations of galaxy formation find that they cannot explain the observed properties of galaxies without modeling the complex accretion and "feedback" processes by which galaxies acquire gas and then later expel it after chemical processing by stars. Hubble spectroscopic observations show that galaxies like our Milky Way recycle gas while galaxies undergoing a rapid starburst of activity will lose gas into intergalactic space and become "red and dead." (Credit: NASA; ESA; A. Feild, STScI)
› Larger image

The Hubble observations demonstrate that those galaxies forming stars at a very rapid rate, perhaps a hundred solar masses per year, can drive two-million-degree gas very far out into intergalactic space at speeds of up to two million miles per hour. That's fast enough for the gas to escape forever and never refuel the parent galaxy.

While hot gas "winds" from galaxies have been known for some time, the new COS observations reveal that hot outflows extend to much greater distances than previously thought and can carry a tremendous amount of mass out of a galaxy. Some of the hot gas is moving more slowly and could eventually be recycled. The observations show how gas-rich star-forming spiral galaxies can evolve to elliptical galaxies that no longer have star formation.

The light emitted by this hot plasma is invisible, so the researchers used COS to detect the presence of the gas by the way it absorbs certain colors of light from background quasars. Quasars are the brightest objects in the universe and are the brilliant cores of active galaxies that contain active central black holes. The quasars serve as distant lighthouse beacons that shine through the gas-rich "fog" of hot plasma encircling galaxies. At ultraviolet wavelengths, COS is sensitive to the presence of heavy elements, such as nitrogen, oxygen, and neon. COS's high sensitivity allows many galaxies to be studied that happen to lie in front of the much more distant quasars. The ionized heavy elements are markers for estimating how much mass is in a galaxy's halo.