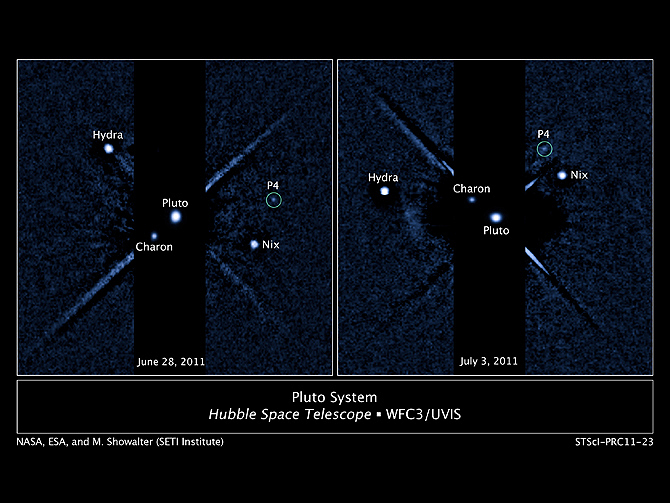 "I find it remarkable that Hubble's cameras enabled us to see such a tiny object so clearly from a distance of more than 3 billion miles (5 billion km)," said Mark Showalter of the SETI Institute in Mountain View, Calif., who led this observing program with Hubble.

The finding is a result of ongoing work to support NASA's New Horizons mission, scheduled to fly through the Pluto system in 2015. The mission is designed to provide new insights about worlds at the edge of our solar system. Hubble's mapping of Pluto's surface and discovery of its satellites have been invaluable to planning for New Horizons' close encounter.

"This is a fantastic discovery," said New Horizons’ principal investigator Alan Stern of the Southwest Research Institute in Boulder, Colo. "Now that we know there's another moon in the Pluto system, we can plan close-up observations of it during our flyby."

The new moon is located between the orbits of Nix and Hydra, which Hubble discovered in 2005. Charon was discovered in 1978 at the U.S. Naval Observatory and first resolved using Hubble in 1990 as a separate body from Pluto. 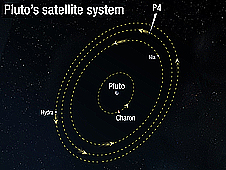 › View larger
Illustration of the Pluto Satellite System orbits with newly discovered moon P4 highlighted. Credit: NASA, ESA, and A. Feild (STScI) The dwarf planet’s entire moon system is believed to have formed by a collision between Pluto and another planet-sized body early in the history of the solar system. The smashup flung material that coalesced into the family of satellites observed around Pluto.

Lunar rocks returned to Earth from the Apollo missions led to the theory that our moon was the result of a similar collision between Earth and a Mars-sized body 4.4 billion years ago. Scientists believe material blasted off Pluto's moons by micrometeoroid impacts may form rings around the dwarf planet, but the Hubble photographs have not detected any so far.

P4 was first seen in a photo taken with Hubble's Wide Field Camera 3 on June 28. It was confirmed in subsequent Hubble pictures taken on July 3 and July 18. The moon was not seen in earlier Hubble images because the exposure times were shorter. There is a chance it appeared as a very faint smudge in 2006 images, but was overlooked because it was obscured.

Hubble is a project of international cooperation between NASA and the European Space Agency. NASA's Goddard Space Flight Center in Greenbelt, Md., manages the telescope. The Space Telescope Science Institute (STScI) in Baltimore conducts Hubble science operations. STScI is operated for NASA by the Association of Universities for Research in Astronomy Inc. in Washington.