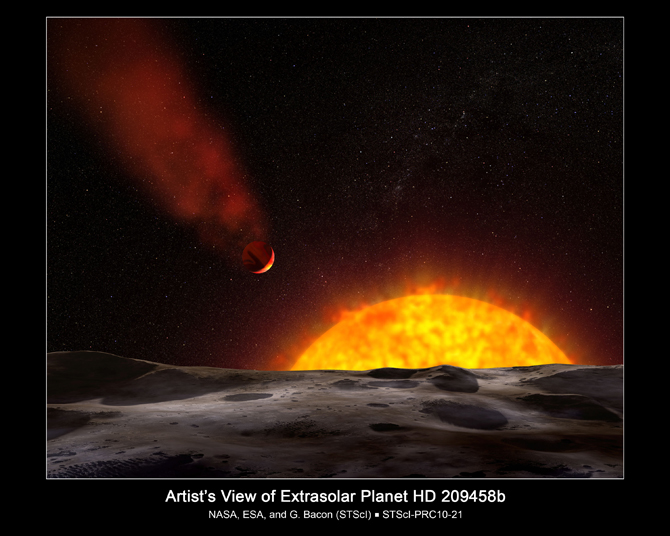 Astronomers using NASA's Hubble Space Telescope have confirmed the existence of a baked object that could be called a "cometary planet." The gas giant planet, named HD 209458b, is orbiting so close to its star that its heated atmosphere is escaping into space.

Observations taken with Hubble's Cosmic Origins Spectrograph (COS) suggest powerful stellar winds are sweeping the cast-off atmospheric material behind the scorched planet and shaping it into a comet-like tail.

"Since 2003 scientists have theorized the lost mass is being pushed back into a tail, and they have even calculated what it looks like," said astronomer Jeffrey Linsky of the University of Colorado in Boulder, leader of the COS study. "We think we have the best observational evidence to support that theory. We have measured gas coming off the planet at specific speeds, some coming toward Earth. The most likely interpretation is that we have measured the velocity of material in a tail."

The planet, located 153 light-years from Earth, weighs slightly less than Jupiter but orbits 100 times closer to its star than the Jovian giant. The roasted planet zips around its star in a short 3.5 days. In contrast, our solar system's fastest planet, Mercury, orbits the Sun in 88 days. The extrasolar planet is one of the most intensely scrutinized, because it is the first of the few known alien worlds that can be seen passing in front of, or transiting, its star. Linsky and his team used COS to analyze the planet's atmosphere during transiting events. During a transit, astronomers study the structure and chemical makeup of a planet's atmosphere by sampling the starlight that passes through it. The dip in starlight because of the planet's passage, excluding the atmosphere, is very small, only about 1.5 percent. When the atmosphere is added, the dip jumps to 8 percent, indicating a bloated atmosphere.

COS detected the heavy elements carbon and silicon in the planet's super-hot, 2,000-degree-Fahrenheit atmosphere. This detection revealed the parent star is heating the entire atmosphere, dredging up the heavier elements and allowing them to escape the planet.

The COS data also showed the material leaving the planet was not all traveling at the same speed. "We found gas escaping at high velocities, with a large amount of this gas flowing toward us at 22,000 miles per hour," Linsky said. "This large gas flow is likely gas swept up by the stellar wind to form the comet-like tail trailing the planet."

Hubble's newest spectrograph has the ability to probe a planet's chemistry at ultraviolet wavelengths not accessible to ground-based telescopes. COS is proving to be an important instrument for probing the atmospheres of "hot Jupiters" like HD 209458b.

Another Hubble instrument, the Space Telescope Imaging Spectrograph (STIS), observed the planet in 2003. The STIS data showed an active, evaporating atmosphere, and a comet-tail-like structure was suggested as a possibility. But STIS wasn't able to obtain the spectroscopic detail necessary to show a tail, or an Earthward-moving component of the gas, during transits. The tail was detected for the first time because of the unique combination of very high ultraviolet sensitivity and good spectral resolution provided by COS.

Although this extreme planet is being roasted by its star, it won't be destroyed anytime soon. "It will take about a trillion years for the planet to evaporate," Linsky said.

The results appeared in the July 10 issue of The Astrophysical Journal.

The Hubble Space Telescope is a project of international cooperation between NASA and the European Space Agency. NASA’s Goddard Space Flight Center manages the telescope. The Space Telescope Science Institute (STScI) conducts Hubble science operations. STScI is operated for NASA by the Association of Universities for Research in Astronomy, Inc. in Washington, D.C.
› Back To Top