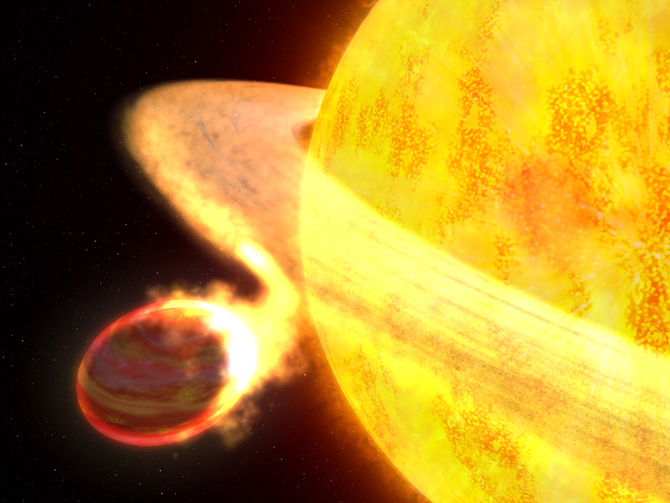 The hottest known planet in the Milky Way galaxy may also be its shortest-lived world. The doomed planet is being eaten by its parent star, according to observations made by a new instrument on NASA's Hubble Space Telescope, the Cosmic Origins Spectrograph (COS). The planet may only have another 10 million years left before it is completely devoured.

The planet, called WASP-12b, is so close to its sunlike star that it is superheated to nearly 2,800 degrees Fahrenheit and stretched into a football shape by enormous tidal forces. The atmosphere has ballooned to nearly three times Jupiter's radius and is spilling material onto the star. The planet is 40 percent more massive than Jupiter.

This effect of matter exchange between two stellar objects is commonly seen in close binary star systems, but this is the first time it has been seen so clearly for a planet.

"We see a huge cloud of material around the planet, which is escaping and will be captured by the star. We have identified chemical elements never before seen on planets outside our own solar system," says team leader Carole Haswell of The Open University in Great Britain.

Haswell and her science team's results were published in the May 10, 2010 issue of The Astrophysical Journal Letters.

A theoretical paper published in the science journal Nature last February by Shu-lin Li of the Department of Astronomy at the Peking University, Beijing, first predicted that the planet's surface would be distorted by the star's gravity, and that gravitational tidal forces make the interior so hot that it greatly expands the planet's outer atmosphere. Now Hubble has confirmed this prediction.

WASP-12 is a yellow dwarf star located approximately 600 light-years away in the winter constellation Auriga. The exoplanet was discovered by the United Kingdom's Wide Area Search for Planets (WASP) in 2008. The automated survey looks for the periodic dimming of stars from planets passing in front of them, an effect called transiting. The hot planet is so close to the star it completes an orbit in 1.1 days.

The unprecedented ultraviolet (UV) sensitivity of COS enabled measurements of the dimming of the parent star's light as the planet passed in front of the star. These UV spectral observations showed that absorption lines from aluminum, tin, manganese, among other elements, became more pronounced as the planet transited the star, meaning that these elements exist in the planet's atmosphere as well as the star's. The fact the COS could detect these features on a planet offers strong evidence that the planet's atmosphere is greatly extended because it is so hot.

The UV spectroscopy was also used to calculate a light curve to precisely show just how much of the star's light is blocked out during transit. The depth of the light curve allowed the COS team to accurately calculate the planet's radius. They found that the UV-absorbing exosphere is much more extended than that of a normal planet that is 1.4 times Jupiter's mass. It is so extended that the planet's radius exceeds its Roche lobe, the gravitational boundary beyond which material would be lost forever from the planet's atmosphere.