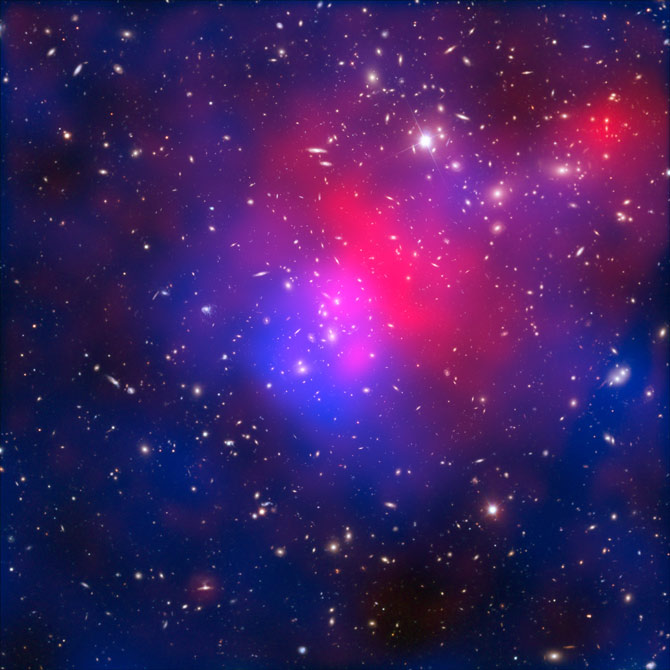 The giant galaxy cluster appears to be the result of a simultaneous pile-up of at least four separate, smaller galaxy clusters. The crash took place over a span of 350 million years.

The galaxies in the cluster make up less than 5 percent of its mass. The gas (around 20 percent) is so hot that it shines only in X-rays (colored red in this image). The distribution of invisible dark matter (making up around 75 percent of the cluster’s mass) is colored here in blue.

Dark matter does not emit, absorb, or reflect light, but it makes itself apparent through its gravitational attraction. To pinpoint the location of this elusive substance the team exploited a phenomenon known as gravitational lensing. This is the bending of light rays from distant galaxies as they pass through the gravitational field created by the cluster. The result is a series of telltale distortions in the images of galaxies in the background of the Hubble and VLT observations. By carefully analyzing the way that these images are distorted, it is possible to accurately map where the dark matter lies.

Chandra mapped the distribution of hot gas in the cluster.

The data suggest that the complex collision has separated out some of the hot gas (which interacts upon collision) and the dark matter (which does not) so that they now lie apart from each other, and from the visible galaxies. Near the core of the cluster there is a “bullet” shape where the gas of one cluster collided with that of another to create a shock wave. The dark matter passed through the collision unaffected.

In another part of the cluster, galaxies and dark matter can be found, but no hot gas. The gas may have been stripped away during the collision, leaving behind no more than a faint trail.