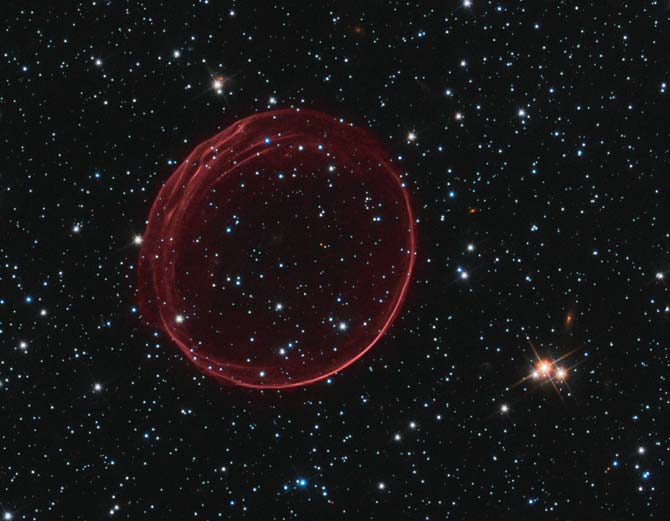 › View high resolution image (12.3 Mb)
Credit: NASA, ESA, and the Hubble Heritage Team (STScI/AURA) Acknowledgment: J. Hughes (Rutgers University)
A delicate sphere of gas, photographed by NASA's Hubble Space Telescope, floats serenely in the depths of space. The pristine shell, or bubble, is the result of gas that is being shocked by the expanding blast wave from a supernova. Called SNR 0509-67.5 (or SNR 0509 for short), the bubble is the visible remnant of a powerful stellar explosion in the Large Magellanic Cloud (LMC), a small galaxy about 160,000 light-years from Earth.

Ripples in the shell's surface may be caused by either subtle variations in the density of the ambient interstellar gas, or possibly driven from the interior by pieces of the ejecta. The bubble-shaped shroud of gas is 23 light-years across and is expanding at more than 11 million miles per hour (5,000 kilometers per second).

Astronomers have concluded that the explosion was one of an especially energetic and bright variety of supernovae. Known as Type Ia, such supernova events are thought to result from a white dwarf star in a binary system that robs its partner of material, takes on much more mass than it is able to handle, and eventually explodes.

Hubble's Advanced Camera for Surveys observed the supernova remnant on Oct. 28, 2006 with a filter that isolates light from glowing hydrogen seen in the expanding shell. These observations were then combined with visible-light images of the surrounding star field that were imaged with Hubble's Wide Field Camera 3 on Nov. 4, 2010.

With an age of about 400 years as seen from Earth, the supernova might have been visible to southern hemisphere observers around the year 1600, however, there are no known records of a "new star" in the direction of the LMC near that time. A more recent supernova in the LMC, SN 1987A, did catch the eye of Earth viewers and continues to be studied with ground- and space-based telescopes, including Hubble.

For images and more information about SNR 0509, visit: