Grow Text SizeShrink Text Size
Hubble's Neptune Anniversary Pictures
Today, Neptune has arrived at the same location in space where it was discovered nearly 165 years ago. To commemorate the event, NASA's Hubble Space Telescope has taken these "anniversary pictures" of the blue-green giant planet.

Neptune is the most distant major planet in our solar system. German astronomer Johann Galle discovered the planet on September 23, 1846. At the time, the discovery doubled the size of the known solar system. The planet is 2.8 billion miles (4.5 billion kilometers) from the Sun, 30 times farther than Earth. Under the Sun's weak pull at that distance, Neptune plods along in its huge orbit, slowly completing one revolution approximately every 165 years. 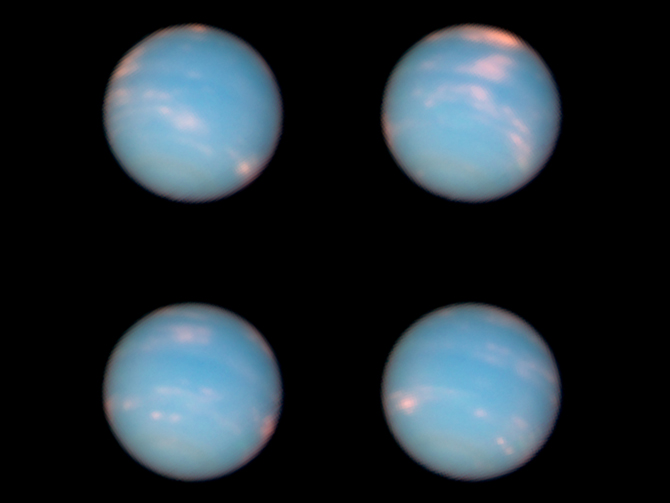 These four Hubble images of Neptune were taken with the Wide Field Camera 3 on June 25-26, during the planet's 16-hour rotation. The snapshots were taken at roughly four-hour intervals, offering a full view of the planet. The images reveal high-altitude clouds in the northern and southern hemispheres. The clouds are composed of methane ice crystals.

The giant planet experiences seasons just as Earth does, because it is tilted 29 degrees, similar to Earth's 23-degree-tilt. Instead of lasting a few months, each of Neptune's seasons continues for about 40 years.

In the Hubble images, absorption of red light by methane in Neptune's atmosphere gives the planet its distinctive aqua color. The clouds are tinted pink because they are reflecting near-infrared light.

A faint, dark band near the bottom of the southern hemisphere is probably caused by a decrease in the hazes in the atmosphere that scatter blue light. The band was imaged by NASA's Voyager 2 spacecraft in 1989, and may be tied to circumpolar circulation created by high-velocity winds in that region.

The temperature difference between Neptune's strong internal heat source and its frigid cloud tops, about minus 260 degrees Fahrenheit, might trigger instabilities in the atmosphere that drive large-scale weather changes. 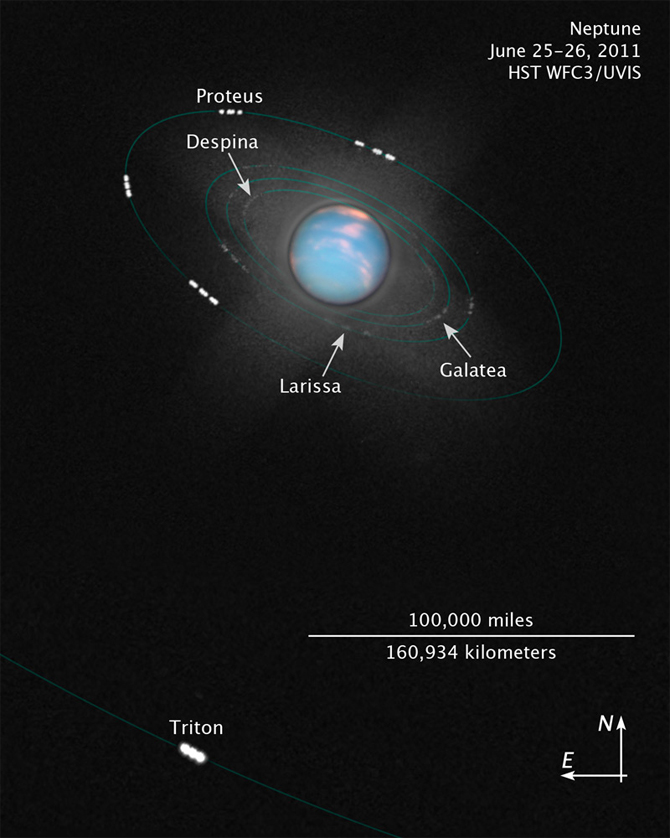 This illustration is a composite of numerous separate Hubble WFC3 images. A color image composed of exposures made through three color filters shows the disk of Neptune, revealing clouds in its atmosphere. 48 separate images from a single filter were brightened to reveal the very faint moons. The white dots are Neptune's inner moons moving along their orbits during Hubble's observations. The solid green lines trace the full orbit of each moon. The spacing of the moon images follows the timing of each Hubble exposure. About 30 moons are known to orbit Neptune, most of which are too faint or orbit too far away to appear in these images. Illustration credit: NASA, ESA, and Z. Levay (STScI)
› Larger image

Neptune has an intriguing history. It was Uranus that led astronomers to Neptune. Uranus, the seventh planet from the Sun, is Neptune's inner neighbor. British astronomer Sir William Herschel and his sister Caroline found Uranus in 1781, 55 years before Neptune was spotted. Shortly after the discovery, Herschel noticed that the orbit of Uranus did not match the predictions of Newton's theory of gravity. Studying Uranus in 1821, French astronomer Alexis Bouvard speculated that another planet was tugging on the giant planet, altering its motion.

Twenty years later, Urbain Le Verrier of France and John Couch Adams of England, who were mathematicians and astronomers, independently predicted the location of the mystery planet by measuring how the gravity of a hypothetical unseen object could affect Uranus's path. Le Verrier sent a note describing his predicted location of the new planet to the German astronomer Johann Gottfried Galle at the Berlin Observatory. Over the course of two nights in 1846, Galle found and identified Neptune as a planet, less than a degree from Le Verrier's predicted position. The discovery was hailed as a major success for Newton's theory of gravity and the understanding of the universe.

Galle was not the first to see Neptune. In December 1612, while observing Jupiter and its moons with his handmade telescope, astronomer Galileo Galilei recorded Neptune in his notebook, but as a star. More than a month later, in January 1613, he noted that the "star" appeared to have moved relative to other stars. But Galileo never identified Neptune as a planet, and apparently did not follow up those observations, so he failed to be credited with the discovery.


Neptune is not visible to the naked eye, but may be seen in binoculars or a small telescope. It can be found in the constellation Aquarius, close to the boundary with Capricorn.

Neptune-mass planets orbiting other stars may be common in our Milky Way galaxy. NASA's Kepler mission, launched in 2009 to hunt for Earth-size planets, is finding increasingly smaller extrasolar planets, including many the size of Neptune.

Hubble is a project of international cooperation between NASA and the European Space Agency. Goddard manages the telescope. The Space Telescope Science Institute (STScI) conducts Hubble science operations. STScI is operated for NASA by the Association of Universities for Research in Astronomy Inc. in Washington.
› Back To Top