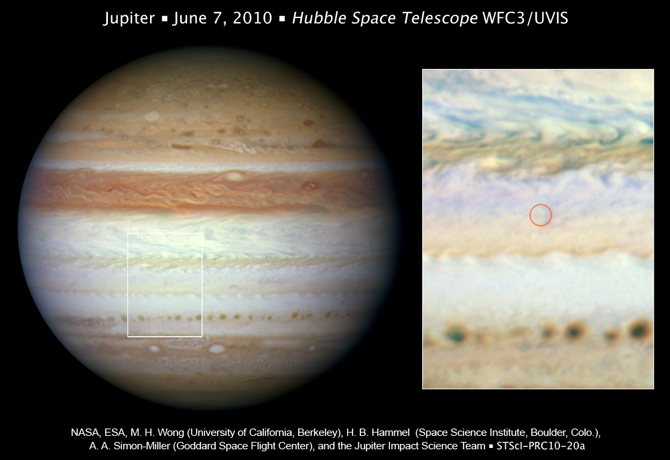 Detailed observations made by NASA’s Hubble Space Telescope have found an answer to the flash of light seen June 3 on Jupiter. It came from a giant meteor burning up high above Jupiter’s cloud tops. The space visitor did not plunge deep enough into the atmosphere to explode and leave behind any telltale cloud of debris, as seen in previous Jupiter collisions.

Astronomers around the world knew that something must have hit the giant planet to unleash a flash of energy bright enough to be seen 400 million miles away. But they didn’t know how deeply it penetrated into the atmosphere. There have been ongoing searches for the “black-eye” pattern of a deep direct hit. 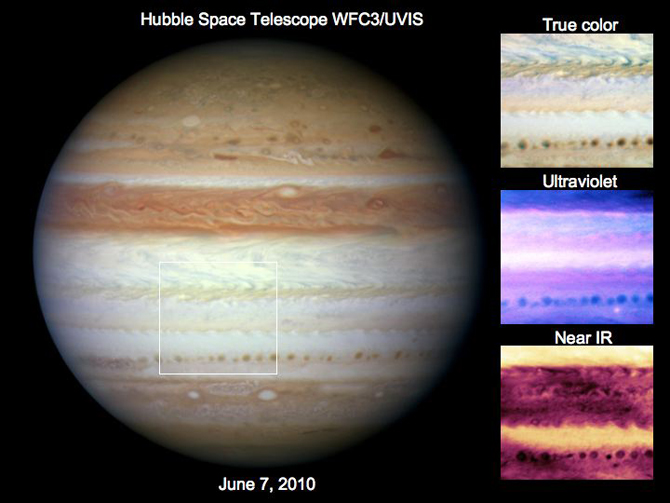 › View larger image
The strongest evidence that the bright flash seen on Jupiter was a meteor comes from what Hubble did not see: a sooty trail of debris. If an object had descended beneath Jupiter’s clouds and exploded as a fireball, then debris would have rained down on the cloud tops. We would be able to see the debris at several wavelengths of light. In the visible region (top box, “true color”) and ultraviolet region (middle box), we would see a dark, sooty smudge. In the very near infrared region (bottom box, “Near IR”), which is where trace amounts of methane gas absorb light in Jupiter’s atmosphere, the planet itself is darker than debris soot, so the smudge would be brighter than its surroundings. This was seen for the 1994 Shoemaker-Levy 9 impacts, as well as the 2009 impact. As this compilation of images shows, we saw no UV dark spot and no near-IR bright spot for the June 3 event. Image Credit: NASA, ESA, M.H. Wong (University of California, Berkeley), H.B. Hammel (Space Science Institute, Boulder, Colo.), A.A. Simon-Miller (Goddard Space Flight Center), and the Jupiter Impact Science Team

The sharp vision and ultraviolet sensitivity of Hubble’s Wide Field Camera 3 were brought to bear on seeking out any trace evidence of the aftermath of the cosmic collision. Images taken on June 7 — just over three days after the flash was sighted — show no sign of debris above Jupiter’s cloud tops. This means that the object didn’t descend beneath the clouds and explode as a fireball. If it did, dark sooty blast debris would have been ejected and would have rained down onto the cloud tops, and the impact site would have appeared dark in the ultraviolet and visible images due to debris from an explosion," says team member Heidi Hammel of the Space Science Institute in Boulder, Colo. “We see no feature that has those distinguishing characteristics in the known vicinity of the impact, suggesting there was no major explosion and fireball.”

Dark smudges marred Jupiter’s atmosphere when a series of comet fragments hit Jupiter in July 1994. A similar phenomenon occurred in July 2009 when a suspected asteroid slammed into Jupiter. The latest intruder is estimated to be only a fraction the size of these previous impactors.

“We suspected for this 2010 impact there might be no big explosion driving a giant plume, and hence no resulting debris field to be imaged. There was just the meteor, and Hubble confirmed this,” adds Hammel, a veteran Jupiter observer of the 1994 string of impacts. 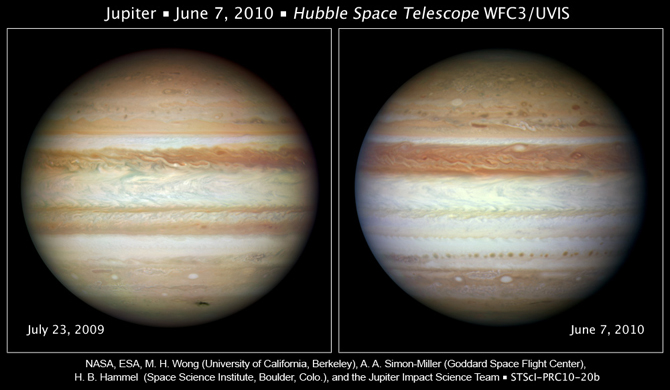 Australian amateur astronomer Anthony Wesley saw the flash at 4:31 p.m. (EDT) on June 3. He was watching a live video feed of Jupiter from his telescope. In the Philippines, amateur astronomer Chris Go confirmed that he had simultaneously recorded the transitory event on video.

The two-second-long flash of light in the videos of Jupiter was created by the same physics that causes a meteor (or “shooting star”) on Earth. Atmospheric ram pressure (not friction) heats the impacting body to a very high temperature, and as the hot object streaks through the atmosphere, it leaves behind a glowing trail of superheated atmospheric gases and vaporized meteor material that rapidly cools and fades in just a few seconds.

Though astronomers are largely uncertain about the rate of large meteoroid impacts on the planets, the best guess for Jupiter is that the smallest detectable events may happen as frequently as every few weeks. “The meteor flashes are so brief they are easily missed, even in video recordings, or perhaps misidentified as detector noise or cosmic ray hits on imaging devices,” says team member Mike Wong of the University of California at Berkeley.

“It’s difficult to even know what the current impact rates are throughout the solar system. That’s partly why we are so excited by the latest impact. It illustrates a new capability that can be exploited with increased monitoring of Jupiter and the other planets,” says Amy Simon-Miller of NASA’s Goddard Space Flight Center, the principal investigator on the Jupiter observation.

As a bonus, the Hubble observations also allowed scientists to get a close-up look at changes in Jupiter’s atmosphere following the disappearance of the dark Southern Equatorial Belt (SEB) several months ago.

The team predicts that these ammonia clouds should clear out in a few months, as it has done in the past. The clearing of the ammonia cloud layer should begin with a number of dark spots like that seen by Hubble along the boundary of the south tropical zone.

“The Hubble images tell us these spots are holes resulting from localized downdrafts taking place. We often see these types of holes when a change is about to occur,” Simon-Miller says.

“The SEB last faded in the early 1970s. We haven’t been able to study this at this level of detail before,” Simon-Miller adds. "The changes of the last few years are adding to an extraordinary database on dramatic cloud changes on Jupiter.”

The Hubble Space Telescope is a project of international cooperation between NASA and the European Space Agency. NASA’s Goddard Space Flight Center manages the telescope. The Space Telescope Science Institute (STScI) conducts Hubble science operations. STScI is operated for NASA by the Association of Universities for Research in Astronomy, Inc. in Washington, D.C.