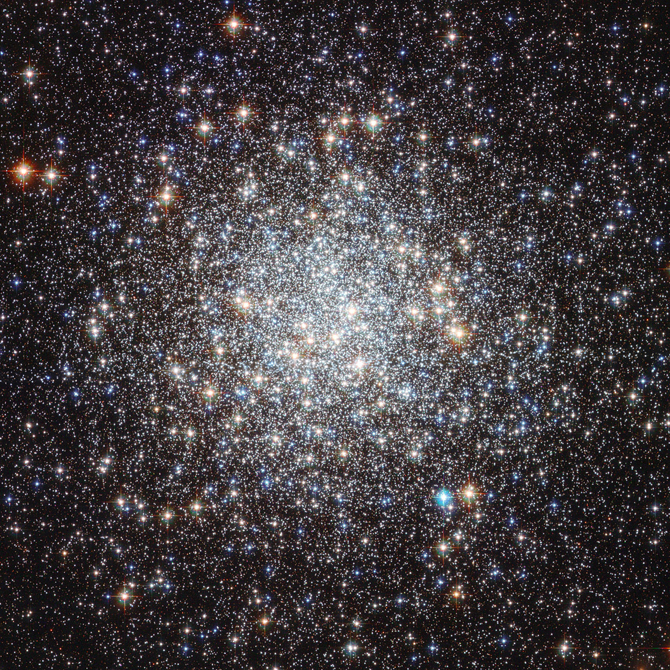 The NASA/ESA Hubble Space Telescope has produced the most detailed image so far of Messier 9, a globular star cluster located close to the center of the galaxy. This ball of stars is too faint to see with the naked eye, yet Hubble can see over 250,000 individual stars shining in it.

Messier 9, pictured here, is a globular cluster, a roughly spherical swarm of stars that lies around 25,000 light-years from Earth, near the centre of the Milky Way, so close that the gravitational forces from the galactic centre pull it slightly out of shape.

Globular clusters are thought to harbor some of the oldest stars in our galaxy, born when the Universe was just a small fraction of its current age. As well as being far older than the sun — around twice its age — the stars of Messier 9 also have a markedly different composition, and are enriched with far fewer heavier elements than the sun.

In particular, the elements crucial to life on Earth, like oxygen and carbon, and the iron that makes up our planet’s core, are very scarce in Messier 9 and clusters like it. This is because the universe’s heavier elements were gradually formed in the cores of stars, and in supernova explosions. When the stars of Messier 9 formed, there were far smaller quantities of these elements in existence.

Messier 9, as its name suggests, was discovered by the great French astronomer Charles Messier in 1764. Even through the most advanced telescopes of the day, none of the stars in the cluster could be seen individually. Messier, seeing only a faint smudge, therefore classified the object as a nebula — or “cloud” in Latin. It was only later in the 18th century that astronomers, most notably William Herschel, began to spot stars within the cluster.

The contrast between Messier’s equipment and the tools at the disposal of today’s astronomers is stark. Hubble’s image, the highest resolution image yet made of Messier 9, is able to resolve individual stars, right into the crowded centre of the cluster. Over 250,000 of them are neatly focused on the detector of Hubble’s Advanced Camera for Surveys, in an image which covers an area no bigger than the size of the head of a pin held at arm’s length.

As well as showing the individual stars, Hubble’s image clearly shows the different colors of the stars. A star’s color is directly related to its temperature — counter-intuitively, perhaps, the redder it is, the cooler it is; and the bluer it is, the hotter. The wide range of stellar temperatures here is clearly displayed by the broad palette of colors visible in Hubble’s image of Messier 9.

Messier 9’s neighborhood is interesting too, and is marked by two vast and dark nebulae. These pitch-black clouds of interstellar dust are known as Barnard 259 (to the south-east of Messier 9) and Barnard 64 (to the west), and are clearly visible in wide-field images of the cluster.

The Hubble Space Telescope is a project of international cooperation between ESA and NASA.
› Back To Top