Grow Text SizeShrink Text Size
Hubble Zooms in on a Magnified Galaxy
Thanks to the presence of a natural "zoom lens" in space, NASA's Hubble Space Telescope got a uniquely close-up look at the brightest "magnified" galaxy yet discovered.

This observation provides a unique opportunity to study the physical properties of a galaxy vigorously forming stars when the universe was only one-third its present age. 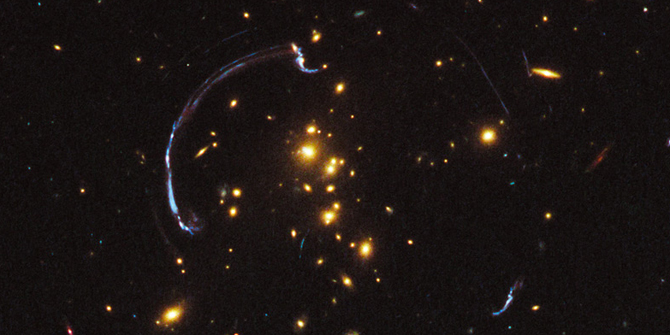 Thanks to the presence of a natural “zoom lens” in space, this is a close-up look at brightest distant “magnified” galaxy in the universe known to date. It is one of the most striking examples of gravitational lensing, where the gravitational field of a foreground galaxy bends and amplifies the light of a more distant background galaxy. In this image the light from a distant galaxy, nearly 10 billion light-years away, has been warped into a nearly 90-degree arc of light in the galaxy cluster RCS2 032727-132623. The galaxy cluster lies 5 billion light-years away. The background galaxy’s image is 20 times larger and over three times brighter than typically lensed galaxies. The natural color image was taken in March 2011 with the Hubble Space Telescope’s Wide Field Camera 3. Credit: NASA; ESA; J. Rigby (NASA Goddard Space Flight Center); and K. Sharon (Kavli Institute for Cosmological Physics, University of Chicago)
› Larger image
A so-called gravitational lens is produced when space is warped by a massive foreground object, whether it is the sun, a black hole or an entire cluster of galaxies. The light from more-distant background objects is distorted, brightened and magnified as it passes through this gravitationally disturbed region.

A team of astronomers led by Jane Rigby of NASA's Goddard Space Flight Center in Greenbelt, Md., aimed Hubble at one of the most striking examples of gravitational lensing, a nearly 90-degree arc of light in the galaxy cluster RCS2 032727-132623. Hubble's view of the distant background galaxy is significantly more detailed than could ever be achieved without the help of the gravitational lens.

The presence of the lens helps show how galaxies evolved from 10 billion years ago to today. While nearby galaxies are fully mature and are at the tail end of their star-formation histories, distant galaxies tell us about the universe's formative years. The light from those early events is just now arriving at Earth. Very distant galaxies are not only faint but also appear small on the sky. Astronomers would like to see how star formation progressed deep within these galaxies. Such details would be beyond the reach of Hubble's vision were it not for the magnification made possible by gravity in the intervening lens region.

In 2006 a team of astronomers using the Very Large Telescope in Chile measured the arc's distance and calculated that the galaxy appears more than three times brighter than previously discovered lensed galaxies. In 2011 astronomers used Hubble to image and analyze the lensed galaxy with the observatory's Wide Field Camera 3.

The distorted image of the galaxy is repeated several times in the foreground lensing cluster, as is typical of gravitational lenses. The challenge for astronomers was to reconstruct what the galaxy really looked like, were it not distorted by the cluster's funhouse-mirror effect.

Hubble's sharp vision allowed astronomers to remove the distortions and reconstruct the galaxy image as it would normally look. The reconstruction revealed regions of star formation glowing like bright Christmas tree bulbs. These are much brighter than any star-formation region in our Milky Way galaxy.

Through spectroscopy, the spreading out of the light into its constituent colors, the team plans to analyze these star-forming regions from the inside out to better understand why they are forming so many stars.

For images and more information about galaxy RCS2 032727-132623 and gravitational lensing, visit: