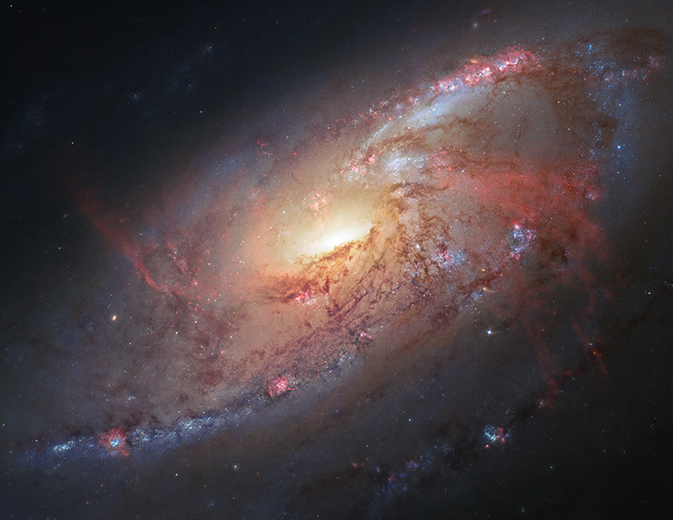 Working with astronomical image processors at the Space Telescope Science Institute in Baltimore, Md., renowned astro-photographer Robert Gendler has taken science data from the Hubble Space Telescope (HST) archive and combined it with his own ground-based observations to assemble a photo illustration of the magnificent spiral galaxy M106.

Gendler retrieved archival Hubble images of M106 to assemble a mosaic of the center of the galaxy. He then used his own and fellow astro-photographer Jay GaBany's observations of M106 to combine with the Hubble data in areas where there was less coverage, and finally, to fill in the holes and gaps where no Hubble data existed.

Robert Gendler is a physician by profession but has been active in astrophotography for two decades. Robert started taking astro-images from his driveway in suburban Connecticut. He then spent several years imaging remotely from places like New Mexico and Western Australia. More recently, Robert has been spending his time assembling hybrid images from multiple data sources including the Hubble Legacy Archive. Many of these images have been featured on "Astronomy Picture of the Day" and in various books and magazines.

This portrait of M106 contains only the inner structure around the halo and nucleus of this Seyfert II active galaxy. Large amounts of gas from the galaxy are thought to be falling into and fueling a supermassive black hole contained in the nucleus. Also known as NGC 4258, M106 lies 23.5 million light-years away, in the constellation Canes Venatici.

The Hubble Space Telescope is a project of international cooperation between NASA and the European Space Agency. NASA’s Goddard Space Flight Center in Greenbelt, Md., manages the telescope. The Space Telescope Science Institute (STScI) in Baltimore, Md., conducts Hubble science operations. STScI is operated by the Association of Universities for Research in Astronomy, Inc., in Washington.