Grow Text SizeShrink Text Size
Hubble Sees Hidden Treasure in Large Magellanic Cloud
Nearly 200,000 light-years from Earth, the Large Magellanic Cloud, a satellite galaxy of the Milky Way, floats in space, in a long and slow dance around our galaxy. Vast clouds of gas within it slowly collapse to form new stars. In turn, these light up the gas clouds in a riot of colors, visible in this image from the NASA/ESA Hubble Space Telescope.

The Large Magellanic Cloud (LMC) is ablaze with star-forming regions. From the Tarantula Nebula, the brightest stellar nursery in our cosmic neighborhood, to LHA 120-N 11, part of which is featured in this Hubble image, the small and irregular galaxy is scattered with glowing nebulae, the most noticeable sign that new stars are being born. 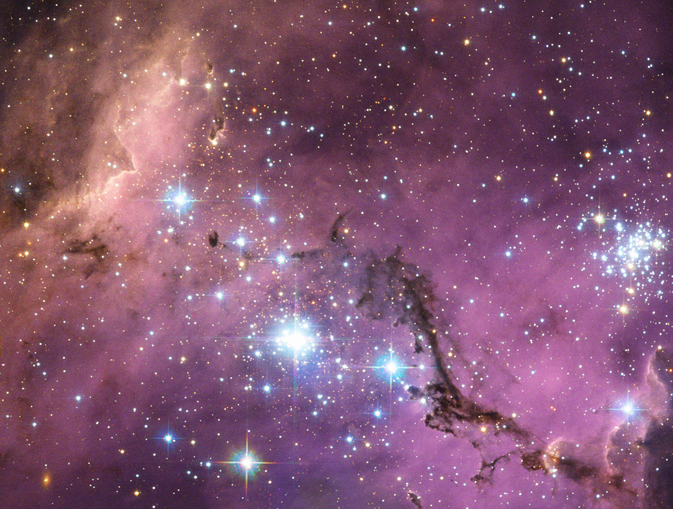 Credit: ESA/NASA/Hubble
› Larger image
The LMC is in an ideal position for astronomers to study the phenomena surrounding star formation. It lies in a fortuitous location in the sky, far enough from the plane of the Milky Way that it is neither outshone by too many nearby stars, nor obscured by the dust in the Milky Way’s center. It is also close enough to study in detail (less than a 10th of the distance to the Andromeda Galaxy, the closest spiral galaxy), and lies almost face-on to us, giving us a bird’s eye view.

LHA 120-N 11 (known as N11 for short) is a particularly bright region of the LMC, consisting of several adjacent pockets of gas and star formation. NGC 1769 (in the center of this image) and NGC 1763 are among the brightest parts.

In the center of this image, a dark finger of dust blots out much of the light. While nebulae are mostly made of hydrogen, the simplest and most plentiful element in the universe, dust clouds are home to heavier and more complex elements, which go on to form rocky planets like Earth. Much finer than household dust (it is more like smoke); this interstellar dust consists of material expelled from previous generations of stars as they died.

The data in this image were identified by Josh Lake, an astronomy teacher at Pomfret School in Connecticut, in Hubble's Hidden Treasures image processing competition. The competition invited members of the public to dig out unreleased scientific data from Hubble’s vast archive, and to process them into stunning images.

Josh Lake won first prize in the competition with an image contrasting the light from glowing hydrogen and nitrogen in N11. The image above combines the data he identified with additional exposures taken in blue, green and near infrared light.

The Hubble Space Telescope is a project of international cooperation between ESA and NASA.
› Back To Top