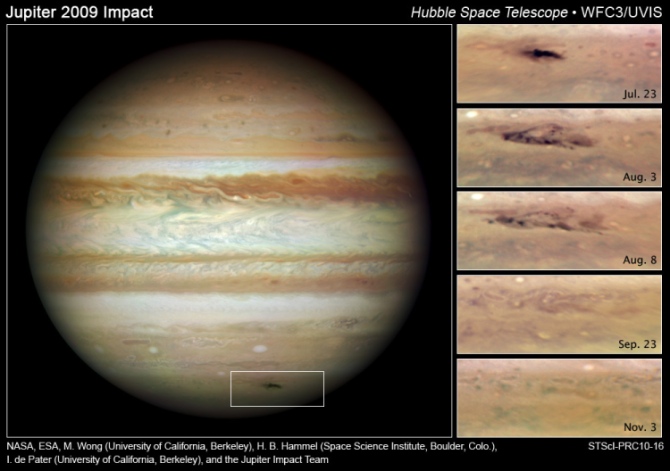 Without warning, a mystery object struck Jupiter on July 19, 2009, leaving a dark bruise the size of the Pacific Ocean. The spot first caught the eye of an amateur astronomer in Australia, and soon, observatories around the world, including NASA’s Hubble Space Telescope, were zeroing in on the unexpected blemish.

Astronomers had witnessed this kind of cosmic event before. Similar scars had been left behind during the course of a week in July 1994, when more than 20 pieces of Comet P/Shoemaker-Levy 9 (SL9) plunged into Jupiter’s atmosphere. The 2009 impact occurred during the same week, 15 years later.

Astronomers who compared Hubble images of both collisions say the culprit may have been an asteroid about 1,600 feet (500 meters) wide. The images, therefore, may show for the first time the immediate aftermath of an asteroid, rather than a comet, striking another planet.

The Jupiter bombardments reveal that the solar system is a rambunctious place, where unpredictable events may occur more frequently than first thought.

“This solitary event caught us by surprise, and we can only see the aftermath of the impact, but fortunately we do have the 1994 Hubble observations that captured the full range of impact phenomena, including the nature of the objects from pre-impact observations” says astronomer Heidi Hammel of the Space Science Institute in Boulder, Colo., leader of the Jupiter impact study.

"The object that hit Jupiter this time would have been small, dark, and cold—in other words, hard for us to see before the impact, regardless of which wavelength we used for observations," adds Amy Simon-Miller, a co-investigator at NASA's Goddard Space Flight Center in Greenbelt, Md.

The analysis revealed key differences between the two collisions (in 1994 and 2009), providing clues to the 2009 event. Astronomers saw a distinct halo around the 1994 impact sites in Hubble ultraviolet (UV) images, evidence of fine dust arising from a comet-fragment strike. The UV images also showed a strong contrast between impact-generated debris and Jupiter’s clouds.

Hubble UV images of the 2009 impact showed no halo and also revealed that the site’s contrast faded rapidly. Both clues suggest a lack of lightweight particles, providing circumstantial evidence for an impact by a solid asteroid rather than a dusty comet.

The elongated shape of the recent impact site also differs from the 1994 strike, indicating that the 2009 object descended from a shallower angle than the SL9 fragments. The 2009 body also came from a different direction than the SL9 pieces.

The visible spectrum, however, was "nearly identical in this case to what we saw for SL9," says Simon-Miller, who recalculated the SL9 spectrum for this analysis. "This isn't surprising, because most of the debris we're looking at is actually burnt-up atmosphere: hydrogen, hydrocarbons, and soot. It's very black, just like the soot we're familiar with, and has a very flat spectrum."

Team member Agustín Sanchez-Lavéga of the University of the Basque Country in Bilbao, Spain, and colleagues performed an analysis of possible orbits that the 2009 impacting body could have taken to collide with Jupiter. Their work indicates the object probably came from the Hilda family of bodies, a secondary asteroid belt consisting of more than 1,100 asteroids orbiting near Jupiter.

The 2009 strike was equal to a few thousand standard nuclear bombs exploding, comparable to the blasts from the medium-sized fragments of SL9. The largest of those fragments created explosions that were many times more powerful than the world’s entire nuclear arsenal blowing up at once.

The recent impact underscores the important work performed by amateur astronomers. “This event beautifully illustrates how amateur and professional astronomers can work together,” notes Hammel.

The study by Hammel’s team appeared in the June 1 issue of The Astrophysical Journal Letters.

For images and more information about Jupiter, visit: